Plot:
After the events in The Avengers, Tony Stark (Robert Downey Jr.) is at least as shook up as his entire worldview. He tries to deal with things by tinkering around with his Iron Man suits but he doesn’t really get anywhere with it. In the meantime, a terrorist keeps setting off bombs and they aren’t close to finding him yet. In a bad mood, Tony challenges him and gives him his home address. And suddenly things get very personal indeed.

Iron Man 3 was very enjoyable and entertaining and far from being as dark as the trailer made it seem. I did have a couple of issues with it, but mostly it’s a wonderful continuation of the series. 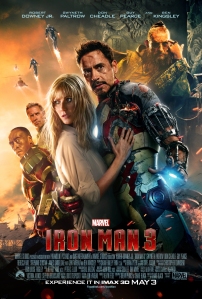 There has been much buzz about the way The Mandarin was handled in the film. I have to admit that I really enjoyed their take on the character and I was surprised by the reveal. I thought it was great storytelling. (Then again, I never read the comics, so I have no attachment to the character in general which might make a difference.) And Ben Kingsley was brilliant.

What I didn’t like, though, was Pepper’s storyline. [SPOILER] I expected a lot from the shot where she’s in Tony’s suit when in fact she is only wearing it because Tony threw it on her to protect her. Then she disappears for a large part of the film into damsel-in-distressdom, but at least gets a superpower for it, only to have it immediately removed without any further complications, which just goes completely against any kind of superhero logic. But I guess we couldn’t have Pepper having superpowers. Might have taken attention away from Tony. [/SPOILER]

But that’s my only real big compaint about the film, basically. That and that I missed Nick Fury. There were some minor things, too [like the unnecessary fireworks at the end of the film] but they were generally outweighed by the sense of humor and the fast pace and the awesome cast.

Also, I really want Jarvis in my cranberries. 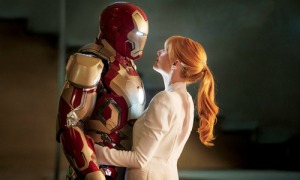