Plot:
For the past two years, Batman (Robert Pattinson) has been a vigilante in Gotham City, one who divides opinions. On Halloween, he is called to a crime scene be Lieutenant Gordon (Jeffrey Wright): the mayor was brutally murdered, and a riddle was left for Batman. When he takes up the trail, it leads him to a nightclub run by Oz (Colin Farrell) with ties to Carmine Falcone (John Turturro). And it leads him to Selina (Zoë Kravitz) who works as a waitress there and has her own investigation. As more people are murdered and more clues left, it becomes a race against time.

I really did not expect much of The Batman. Everything about it screamed that it would not be a good experience. But it is a Batman film, so I couldn’t resist. Anyhow, turns out that I was mistaken: The Batman is even worse than I thought it would be.

END_OF_DOCUMENT_TOKEN_TO_BE_REPLACED

Plot:
After having left behind Madeleine (Léa Seydoux) a few years ago, James Bond (Daniel Craig) has retired from service and would like to enjoy a life of leisure. But that’s easier said than done when his old friend and CIA agent Felix Leitner (Jeffrey Wright) contacts him and asks for help with a dangerous technology that was stolen, along with the scientist in charge for it. It’s a request that leads Bond right back to MI6, and to Madeleine.

No Time to Die is a bombastic ending to this incarnation of Bond that tries desperately to give Bond more emotional depth and closure, but succeeds only partly. Still, it did leave me with a certain nostalgia knowing that we’ll never get another Craig Bond.

END_OF_DOCUMENT_TOKEN_TO_BE_REPLACED

Plot:
Arlo (Raymond Ochoa) is the youngest member of his dinosaur family, and he is not only small, but scared of everything. While his siblings handle their chores and rites of passage with apparent ease, Arlo still has problems feeding the chicken. So his father Henry (Jeffrey Wright) gives him a special task: catch a critter that has been raiding their silo. Arlo actually manages to catch the little human (Jack Bright), but can’t go through with killing him. When the boy runs off after being freed, Henry and Arlo chase after him. They get trapped in a thunderstorm which leads to a flash flood and Henry drowns. Riddled with guilt, Arlo finds himself washed ashore a long way from home and somehow has to find his way back.

The Good Dinosaur is a weird film. The main plot and characters are nowhere near the high standards that we usually get from Pixar movies. But everything happening on the sidelines is frankly amazing. 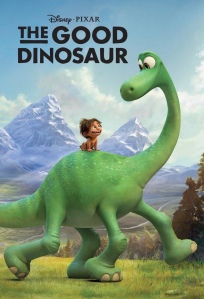 END_OF_DOCUMENT_TOKEN_TO_BE_REPLACED

Plot [with Spoilers for everything up until this part]:
Still reeling from brainwashed Peeta’s (Josh Hutcherson) attack on her, Katniss (Jennifer Lawrence) has no chance of really gathering herself. Instead she shoots promo videos for the rebellion and their cause. As outright war with the Capitol becomes ever more likely, Katniss decides that she has to put an end to things and the only way it will end is if Katniss kills President Snow (Donald Sutherland).

My expectations were pretty low for this final installation in the series since the second half of the last book was the weakest part of the series by far and that was the only thing that was left to bring to the screen. But Mockingjay Part 2 turned out to be better than I expected.

END_OF_DOCUMENT_TOKEN_TO_BE_REPLACED

Plot: [WITH SPOILERS FOR THE PREVIOUS BOOKS]
After the dramatic ending of the last Hunger Games, Katniss (Jennifer Lawrence) wakes up in the rebels’ headquarters in District 13. She discovers that Peeta (Josh Hutcherson) did not make it there – he was captured by President Snow (Donald Sutherland) and the Capitol. But with Katniss are Gale (Liam Hemsworth) and her family (Willow Shields, Paula Malcomson) – who made it out of District 12 right before it was completely obliterated – and a few other Hunger Game victors. While Katniss tries to make sense of the new world order around her, the rebels try to convince her that she should become the Mockingjay: the official symbol of the rebellion.

Mockingjay Part 1 was a very satisfying film, but it did leave me worried for Part 2, since there is not much left of the story that still worked for me in the book. But we’re not there yet, and this film, despite the occasional lengths, does very well.

END_OF_DOCUMENT_TOKEN_TO_BE_REPLACED

I don’t know when the last time was that I saw a movie in the cinema twice. But Only Lovers Left Alive had to be watched again, now it got its regular release here and so I did. And it was still brilliant.

END_OF_DOCUMENT_TOKEN_TO_BE_REPLACED

Plot (with SPOILERS for the first one):
With the way the Hunger Games ended Katniss (Jennifer Lawrence) has definitely upset the system. So before she, Peeta (Josh Hutcherson) and their entourage travel from district to district on their victory tour, Katniss gets a visit from President Snow (Donald Sutherland). He lets her know without a doubt that rebellion of any kind on her part will not be tolerated – and that she has to make this clear to the districts as well, where unrest is brewing. Since it’s not only Katniss’ life that he threatens, but also that of her family and friends, Katniss complies as well as she can. And then the rug is completely pulled from under her when she and Peeta are drawn back into the 75 year special edition of the Games.

END_OF_DOCUMENT_TOKEN_TO_BE_REPLACED

I’ve been looking forward to this movie ever since the words “Tilda Swinton Tom Hiddleston Jim Jarmusch Vampires” were mentioned together, so I was absolutely ecstatic when the opening credits at the surprise screening started rolling and I identified the film. And I’m happy to say that it fulfilled all my expectations and more.

END_OF_DOCUMENT_TOKEN_TO_BE_REPLACED

Plot:
Billy (Mark Wahlberg) is a policeman who shot a rapist who went free. During his trial where he claims self-defence, new evidence comes up but is quickly surpressed by Mayor Hostetler (Russell Crowe) and Comissioner Fairbanks (Jeffrey Wright). Despite being found not guilty, Billy is let go and earns his money by doing investigation work from then on. Years later in the middle of election time, Hostetler contacts him again to have him investigate his wife Cathleen (Catherine Zeta-Jones). But there’s apparently more to the story than just mere infidelity.

Broken City was a decent thriller but nothing that really blew me away, apart from Russell Crowe who obviously had fun with this one. The characters are a little too clichéd to work, the story is unfocused and all of that leaves you a little dissatisfied. 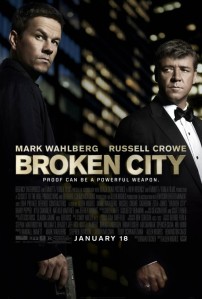 END_OF_DOCUMENT_TOKEN_TO_BE_REPLACED

Plot:
Set directly after the events in Casino Royale, James Bond (Daniel Craig) is out for revenge and to understand exactly what happened with Vesper. To that end he kidnaps Mr White (Jesper Christensen) and he and M (Judi Dench) interrogate him. But before White can reveal much more than that he is working for a mysterious organisation, things go south. In the end Bond is left only with one lead that brings him to seemingly squeaky-clean environmentalist Dominic Greene (Mathieu Amalric). But things are far from being clean. 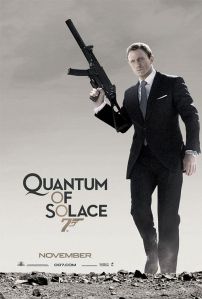