Plot (with SPOILERS for the first one):
With the way the Hunger Games ended Katniss (Jennifer Lawrence) has definitely upset the system. So before she, Peeta (Josh Hutcherson) and their entourage travel from district to district on their victory tour, Katniss gets a visit from President Snow (Donald Sutherland). He lets her know without a doubt that rebellion of any kind on her part will not be tolerated – and that she has to make this clear to the districts as well, where unrest is brewing. Since it’s not only Katniss’ life that he threatens, but also that of her family and friends, Katniss complies as well as she can. And then the rug is completely pulled from under her when she and Peeta are drawn back into the 75 year special edition of the Games. 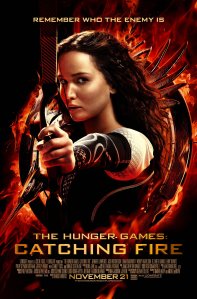 Of course Jennifer Lawrence and Josh Hutcherson continue to be wonderful, as is the supporting cast. But most of all I got caught up with Effie (Elizabeth Banks) and Joanna (Jena Malone): their characters are perfect and somehow much more engaging than in the book and that’s mostly due to some of the best supporting acting I have recently seen. Especially Elizabeth Banks who usually only gets to be funny manages to save Effie from seeming ridiculous (which would have been easily possible, let’s face it) and instead makes her one of the characters I loved the most.

That would have been impressive in any movie, but particularly a movie with such a varied, wonderful cast (Philip Seymour Hoffman, my goodness!). I was a little sorry, though, that with the introduction of so many new characters, it was difficult sometimes to really get to know them before they were offed again.

Moving away from the characters and the acting for a bit: The movie looked wonderful (the costumes, the set and even the camera work was much better this time round) but more importantly it was absolutely engaging. Having read the book, I knew what was gonna happen, of course. But that didn’t mean that I wasn’t at the edge of my seat for pretty much the entirety of the film and that my heart didn’t break several times. (Especially with Cinna and Peeta. For fuck’s sake, I’m already dreading the third film.)

I left the cinema feeling completely satisfied. And if somebody had said, “let’s watch it again straight away”, I probably would have totally gone for it. That’s what movies should be like. 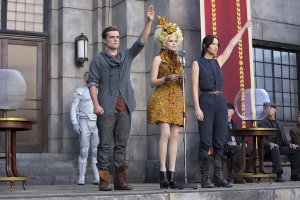 Summarizing: All the yes in the world.