Plot:
Oskar’s (Thomas Horn) father (Tom Hanks) recently died in the 9/11 attack. Oskar has a hard time coping with it, when he stumbles upon a mysterious key in an envelope with the name “Black” on it in his father’s closet. Oskar decides that he has to find out more and the only logical way to go about it is to talk to every person called Black in New York. So he takes the phone book and starts to visit all of them.

The film is one of the most emotionally manipulative movies I have ever seen. Ever. And I still would have liked it a whole lot, if I hadn’t read the book. But in comparison, the film just leaves a small taste of disappointment. 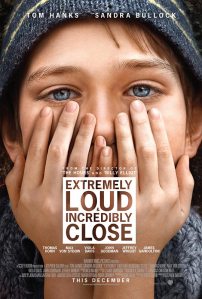 As usual there were quite a few changes made from the book, but in this case there were practically no changes that I appreciated (except for the dad’s role being expanded in a very nice way). They nudged Oskar a couple of inches away from “autism” and towards “a little strange” which made a few of the things he did a little incongruous in my opinion. And they completely obliterated the little bit they showed of the grandparents’ relationship that I loved so much in the book. [And that ending: [SPOILER] why does Oskar get to decide if his grandfather should come back to his grandmother? Wouldn’t it be kind of her job to invite him back, if she wanted to have him back at all? GAAAH. [/SPOILER]] And the mom’s concern for Oskar’s safety just came across a lot better in the book.

But they had some wonderful nods to the visual elements of the book – the pigeons, and the door that was once randomly carried through a shot and of course the falling man. That was very well done. 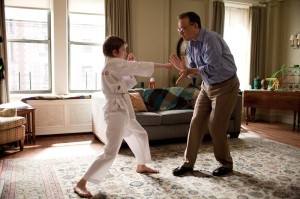 But apart from the comparison to the book the movie was very nice. Yes, it was incredibly manipulative (Alexandre Desplat‘s soundtrack alone would have probably had me crying in minutes), but in a good way. Sometimes it’s just really nice to have your heartstrings tugged.

And the performances were all around really good. Especially Thomas Horn, who had much resting on his shoulders, delivered very well. And I probably don’t have to mention Max von Sydow or Viola Davis who are pretty damn awesome. Only Jeffrey Wright disappointed me a little in this one. 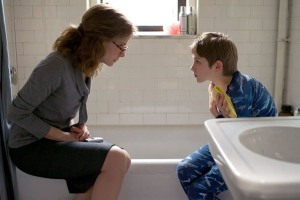 Summarising: Perfect choice if you want to have a good cry. But the book is definitely the better version of the story.