Plot:
Claire Zachanassian (Maria Happel) returns to her hometown of Güllen for the first time in decades. She had to leave the town in shame, betrayed by her lover. But she rose from the ashes, married rich and now she has a plan to get revenge on everybody who ever wronged her – especially her ex.

Der Besuch der alten Dame seems to be a good play, but this production of it really didn’t work. They managed to have a comedy where I could see the funny bits and yet I never laughed. That’s really a problem.

END_OF_DOCUMENT_TOKEN_TO_BE_REPLACED

Plot:
After Agamemnon (Maria Happel) returns home from war with Kassandra (Andrea Wenzl) as his trophy, his wife Klytameistra (Caroline Peters), who is living with Aigisthos (Barbara Petritsch), kills Agamemnon and Kassandra both, to avenge Agamemnon’s killing of Iphigenie, their daughter, a continuation of the family curse that weighs on Agamemnon due to his father and uncle sacrificing their own children to the gods. Agamemnon and Klytameistra’s son Orestes (Aenne Schwarz) vows to revenge the murder of his father too, continuing the spiral of blood and violence.

The production of the Oresteia walks the line between traditional setting and modern sensibilities. Ultimately it is visually striking and well-acted, but maybe a little too conservative. 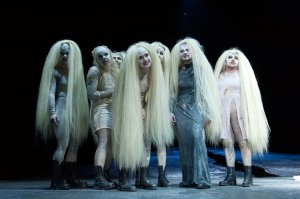 END_OF_DOCUMENT_TOKEN_TO_BE_REPLACED

Plot:
Hermann falls in love with Dorothea, a young refugee who is passing through his village. Since Hermann comes from a rather rich family and Dorothea is penniless, he can’t simply marry her. To make sure that she is of sound character, the Priest and the Apothecary ask for character witnesses. When those are overwhelmingly positive, Hermann brings Dorothea home – introducing her as a maid though.

Hermann and Dorothea is not a play but a poem and Kirchner decided not to adapt it as a play, either, but to have Happel and Schwab dramatically read the poem instead. I think, I would have appreciated a drama version of it a little more. 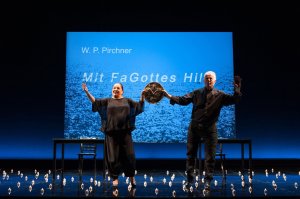 END_OF_DOCUMENT_TOKEN_TO_BE_REPLACED

Plot:
Lenglumé (Nicholas Ofczarek) wakes up one morning after a night of partying. He doesn’t really remember much and only barely recollects that the snoring man next to him is his school friend Mistingue (Michael Maertens) who was with him at their school reunion. Mistingue is doing similarly well. When Lenglumé’s wife Norine (Maria Happel) tells him about the murder of a young, poor woman the previous night, Lenglumé and Mistingue find clues that they were the killers and start putting a plan in motion to conceal their deed.

Die Affäre Rue de Lourcine was funny but also pretty exhausting. I think that another staging would have made it flow much more nicely. Instead it felt pretty long to me in spite of its short 90 minutes running time.

END_OF_DOCUMENT_TOKEN_TO_BE_REPLACED

Plot:
A young man, introducing himself as I the Narrator (Christopher Nell), claims a bit of country road for himself. It’s his bit of the world and his alone, without anybody else interfering. But it doesn’t stay that way for very long. Soon others, the Innocents, come and intrude on his bit of the world, led by the Capo (Martin Schwab) and his wife (Maria Happel). Among them is also an enticing Unknown Woman (Regina Fritsch) who is not quite as taken with I as he is with her. While I maybe wouldn’t mind the intrusion of the Unknown Woman, the rest of the Innocents and the inevitabilty with which they are irritates I.

Die Unschuldigen, ich und die Unbekannte am Rand der Landstraße is a little how all the derogative views on modern theater say that modern theater is like: incoherent, overly long, self-congratulatory and often incomprehensible. It does have strengths, but they are far from outweighing the weaknesses. 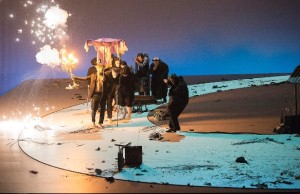 END_OF_DOCUMENT_TOKEN_TO_BE_REPLACED

Plot:
The Mayor (Michael Maertens) of a small town has heard that a government inspector just arrived incognito in his town. He informs the most important men in his town, causing quite a stir among all of them, since neither of them really is without blame in their departments. When they find out that a stranger is staying at the inn, they decide that it must be the inspector and promptly start to shower him in gifts. The stranger – Chlestakov (Fabian Krüger) – is young and poor and doesn’t really know what prompts his good luck, but he’s determined to use it as long as it’s given.

There is a lot going on in this production of Der Revisor, from fake fat to actual live chickens on stage. It was a little too much for my taste, although the parts themselves were really good.