Plot:
The movie chronicles Harvey Milk’s (Sean Penn) life from the point where he meets Scott (James Franco) and moves to San Francisco aka the start of his political life to his assassination by Dan White (Josh Brolin) 8 years later.

The movie has a very strong cast, but unfortunately the screenplay is weak in some parts, giving the actors little to work with. [While I think Dustin Lance Black is really cute and his Oscar speech was great and go gay community!… I don’t hink that he deserved it. I’m really sorry to say that… Really. But it’s the truth.] 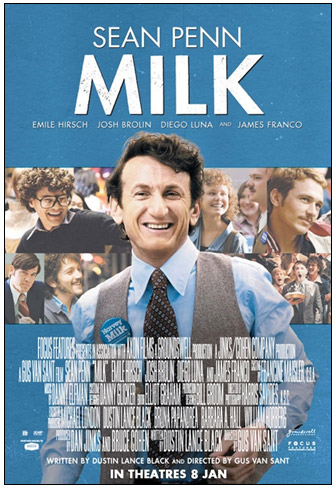 Let’s talk about the screenplay. Maybe the movie was badly cut and the original screenplay would have given me more sense of the secondary characters. But as it was, most characters and their motivations remained obscure. Except for Harvey Milk himself, I didn’t really know why Scott left (I could guess and I’d probably guess right, but I’m not sure), I didn’t know who the people in Harvey’s campaign were, and Dan White remained the greatest mystery of all. Apparently, he was very depressed but that was neither mentioned nor shown once. And then in the epilogue, when the Twinkie Defense, was – again – misrepresented, it made me feel sorry for him.

[The epilogue said that his lawyers claimed that eating too much junk food made White depressed and therefore led to the murder. Actually, what was said, was:

At the trial, noted psychiatrist Martin Blinder testified that White had been depressed at the time of the crime, and pointed to several factors indicating White’s depression: he had quit his job; he shunned his wife; and although normally clean-cut, he had become slovenly in appearance. Furthermore, White had previously been a fitness fanatic and health food advocate, but had begun consuming junk food and sugar-laden soft drinks like Coca-Cola. As an incidental note, Blinder mentioned theories that elements of diet could worsen existing mood swings .

Which is quite a different thing.]

I’m not trying to excuse White’s behaviour, nor do I want to comment on whether his punishment was justified or not. I’m just saying that what was said was fact twisting, with the additional effect of making me feel sorry for the bad guy.

Despite the screenplay, I thought the acting of the suppoorting actors impeccable. James Franco was great, but so were Diego Luna and Emile Hirsch. And Josh Brolin, given the scant material he had, did a wonderful job.
[On a minor sidenote, I actually thought that James Franco with a moustache looked better than his usual self. And if you ever tell anyone that I said that about somebody with a moustache, I’m afraid that something very bad will happen to you.]

Sean Penn, on the other hand… I don’t know, but I thought that his body language was off. I’ve never seen Harvey Milk “in action” so I don’t know if he really moved that way, but I was constantly reminded of Sam in I Am Sam, especially during his public speeches. That is not to say that Sean Penn didn’t act well, but for being Sean Penn, one of the most talented actors ever, he sucked.
[One more reason that the Oscar should have gone to Mickey Rourke, who usually is a crappy actor and once did really, really well.]

But, as they say in Austria, it’s complaining on a very high level. Compared to the less than stellar acting of other movies, the guys here should have all gotten Oscars and Golden Globes and whatever you can think of. 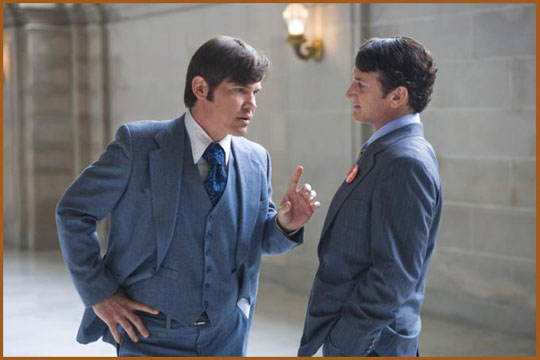 Another minor thing I didn’t like (but that was really minor), was that they repeated one conversation between Scott and Harvey in the end, which we got in its entirety in the beginning. Didn’t know why they did that, thought it unecessary.

Okay, this sounds like a lot of criticism, but actually I really liked the movie.

The soundtrack was good, the score was better (Danny Elfman is the man).

The costumes were great and combined with the set design, it really transported you into the seventies.

The script, for all its other shortcomings, had a warm sense of humour and did a good job depicting Harvey Milk.

In the end when there’s this mass of people with candles, I cried, of course.

The directing was good, but not awesome.

Summarising, I’d say it’s definitely worth to watch and it’s a very good movie, despite its flaws.