Plot:
Harry Caine (Lluís Homar) is a screenplay writer who has gone blind a while ago after an accident. He manages his life with the help of his best friend and agent Judit (Blanca Portillo) and her son Diego (Tamar Novas). When he gets a visit “from the past”, he starts to tell Diego about the passionate affair he had with the actress Lena (Penélope Cruz) a while ago.

If this movie wasn’t a Almodóvar, I’d say it’s very good. But as it is, the standards I hold it to are much higher and the movie loses. It’s still very watchable and quite entertaining, but the “special ingredient” is missing that takes it from being good to being excellent. The plot is a little too predictable, Harry a little too unlikable, Lena a little too mysterious… it kind of adds up and leaves you wondering what happened to Almodóvar. 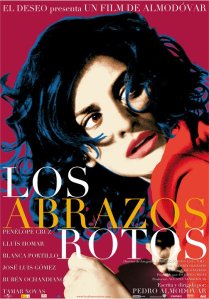 I think the problem was the movie was all over the place… a little bit of Harry’s story here, then: THE PAST!, then FURTHER IN THE PAST!, then what’s happening, then family tragedy, then this, then that. There was a lack of focus which is unusual for Almodóvar. Usually, his movies take the long and winded road, but they always have a destination and a purpose. And I did not get that in Broken Embraces.

But paired with the plot that was really predictable (and didn’t manage to get me not to care about that) and a duration of over two hours, it was probably the longest movie Almodóvar ever made. 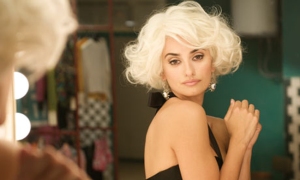 The acting was mostly fine. Cruz was amazing as usual, but I didn’t really buy Homar’s performance. But I had a problem in general with the characters. As I said before, I didn’t like Harry Caine and as he was supposed to be my entrance to the story and the guy I should feel sorry for, that was a bit of a problem. But all of the characters seemed to be a bit of a stretch… Judit, who pines after Harry and therefore betrays him. Lena, who completely turns around the life of two men by just being there. Diego, who is all big eyes and wonder. And Ray X (Rubén Ochandiano), who is so over the top it’s amazing he doesn’t fall off the planet.

[Lest it seems that I thought the movie was abysmal: I didn’t. Really. It’s just that I expect more from Almodóvar.]

But it was beautifully shot and the relationships these characters had all felt very real to me. 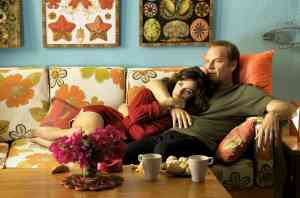 So, summarising: not the best thing Almodóvar ever made but watchable. But I don’t think I’ll be rewatching it – I’d rather see All About My Mother or Talk to Her or Volver again.