When in Rome is the newest movie by Mark Steven Johnson. [I guess after Daredevil and Ghost Rider, it was the only logical choice.] It stars Kristen Bell, Josh Duhamel, Danny DeVito, Will Arnett, Anjelica Huston and Lee Pace.

Plot:
Beth (Kristen Bell) is successful, an up-and-coming curator at the Guggenheim Museum (an awesome job, btw). Of course that also means that she’s an emotional idiot, unable to have a relationship or even appreciate love. You know how it goes. Anyway, she flies to Rome to her sister’s wedding, where she meets the totally cute best man Nick (Josh Duhamel). But then Nick gets kissed by a mysterious plot device lady in red, Beth gets drunk and next thing you know, she’s in a fountain, stealing coins and enslaving men with their love to him (which she gets from the coins, OF COURSE).

When in Rome is actually pretty bad. But Kristen Bell is charming and it managed to wrangle some laughs from me so I guess that’s a yeah? Well, it might would have been if the genius responsible for the casting decided that out of Josh Duhamel and Lee Pace, Josh Duhamel would get the lead. 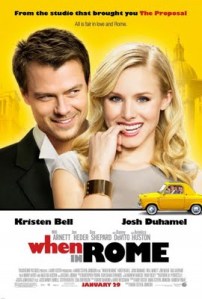 I’m not saying that Josh Duhamel doesn’t have the looks for a leading role. But he has no comedic timing whatsoever. But then again, the entire movie proves that some people don’t know comedic talent when it bites them in the ass. You’ve got Lee Pace, Will Arnett, Danny DeVito and Anjelica Huston and put all their screen time together and you might get 15 minutes. It’s just flabbergasting, really.

At least Kristen Bell is talented. She’s also what tips the movie over the edge from bearable to slightly entertaining. She and that awesome car “chasing” scene. 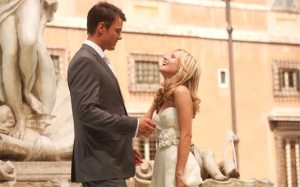 The plot is not only offensive (feminism might have died in the making of this movie), but it’s also incredibly stupid: So, she picks five coins at random from the fountain and all of those five people turn out to be a) male, b) single, c) in New York and d) employed in a way that they have time to stalk a woman.

Also, apparently a woman isn’t able to tell the difference between creepy stalking aka obsession and love. Because it’s really easy to confuse the two. They are just so similar.

[About as much as you see of Lee Pace in the entire film.]

Even though I’m bitching pretty hard about it, When in Rome was okay for a standard RomCom. If you don’t think too hard about it. But you can skip it and never think of it again and your life won’t be any worse.