Plot:
5 people get trapped in an elevator: a mechanic (Logan Marshall-Green), a guard (Bokeem Woodbine), an old lady (Jenny O’Hara), a young woman (Bojana Novakovic) and a salesman (Geoffrey Arend). While police detective Bowden (Chris Messina) tries to get them out of there, weird things start happening inside the elevator. And it’s soon apparent that one of the five trapped people is the devil himself.

I saw the name M. Night Shyamalan (who is credited with the story of the film) and I thought that it was going to be one of those movies that will have an interesting premise and then suck the hell out of it. And not surprisingly, I was right. I’m really glad I didn’t spend any money on this film. 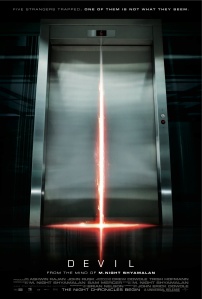 It could have worked. Dowdle is not a bad director, even if not the subtlest. The performances, while not mind-blowing, were solid. And judging by Hard Candy, Brian Nelson should have definitely been able to pull off a decent script. [But then again, he also wrote 30 Days of Night, so that kind of balances out.] But thrown all together, the film somehow becomes less than the sum of its parts.

It fails in the usual Shymalan way: it tries so hard to surprise you with its twist that that becomes its sole reason of existence. And then it is so completely obvious about it that you guess the twist within the first 10 minutes. Seriously. The first image the person who turns out to be the devil (from now on PWTOTBTD) is already completely obvious, but if that isn’t enough, the first time PWTOTBTD opens their mouth, it’s practically a huge billboard announcement of “it’s me!” Sure, they try to throw you off the scent, but they just fail so pathetically at it. 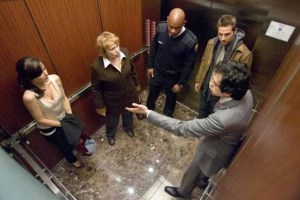 It is not necessary that every movie plot surprises. But when a movie tries so hard to be clever and to make you gasp with the realisation of the PWTOTBTD, it’s hard to focus on anything else, even though there are some very nice moments. Especially the opening with a turned on its head tracking shot was brilliant. It also made you a little nauseous, but mostly it was cool.

Oh well. I’m just happy I learned from the Happening and did not buy tickets for this film. Especially since the last line of the film turns to religious propaganda. 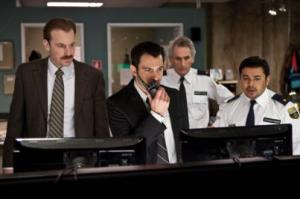 Summarising: Skip it. If you wanna know so badly who it is, there: [SPOILER] it’s the old lady [/SPOILER]