Plot:
Hal Jordan (Ryan Reynolds) is a fighter pilot and basically the definition of irresponsibility. One day Hal stumbles upon a dying alien, Abin Sur (Temuera Morrison). Abin Sur is a Green Lantern, an intergalactic police force. His power source is a ring that can harness will power and which choses Hal to be Abin Sur’s successor. So Hal gets drawn into the world of the Green Lanterns and their biggest foe Parallax (Clancy Brown).

Green Lantern is not a particularly good film. Fortunately for its entertainment value it’s a pretty craptastic film. Would it have hurt if it had made a little more sense? [Topless Robot pretty much takes apart all the plot holes. In a very entertaining way.] Probably not. But then the movie would have had to leave out a few of the bad green screen scenes in front of fake sunsets – and really, who would want that? 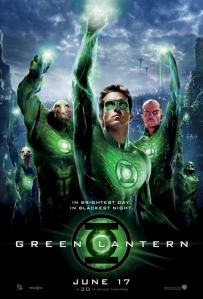 Ryan Reynolds is not a bad Hal Jordan. He has the charm and especially when it comes to showing Hal’s excitement about the ring and its powers, he does great. The problem is that Hal Jordan is an ass. And no amount of charm will change that. This becomes especially apparent since Hal is surrounded by interesting, likeable characters. Especially Peter Sarsgaard’s Hector Hammond is wonderful: The combination of a good character and a good actor just does wonders. I hated watching Hector fall apart. It was just such a tragedy.

The supporting cast is generally pretty amazing. Angela Bassett kicks ass as per usual and Mark Strong does such a good job of making Sinestro a good guy that in the end it is quite unbelievable that Sinestro turns evil. I mean, okay, he is called Sinestro and he is played by Mark Strong. But apart from the meta level, there was nothing whatsoever that would have made this make sense.

The movie’s biggest problem is the writing. There was just one info-dump after the other and they were quite unnecessary infodumps. Bored the hell out of me, especially when they started repeating themselves. Also, there were just not enough jokes. Ryan Reynolds knows how to do jokes, for fuck’s sake, let him do them. And there were just way too many balcony-in-front-of-sunset scenes. Holy freaking crap. [Admittedly though, when Carol (Blake Lively) tells Hal that she recognised him despite his, ahem, huge mask, it was almost worth the other balcony scenes. Almost. “I’ve known you all my life. Did you really think I wouldn’t know you because your cheekbones are covered?” indeed. Take that, Lois Lane.]

Add to that that the 3D and the CGI were less than overwhelming, and you have one hell of a failing movie.

Summarising: Let me just cry over the fact that we didn’t get to see this film: