The thing I loved most about the first one was the slashy tension between Holmes and Watson – and they cranked it up to eleven in this one. Absolutely fantastic and funny (and also all kinds of hot). Robert Downey Jr. and Jude Law really have more chemistry than most of the RomCom couples around.

Unfortunately there was something I hated as much as I loved the flirting – and that was the way the female characters were completely squandered. You got Rachel McAdams, Kelly Reilly, Geraldine James and Noomi Rapace and you give them about 15 minutes screentime? In fucking total? And make Noomi Rapace play the worst gypsy stereotype? That is just bad film making.

And the plot was way too far out there and the ending was just stupid and makes no sense whatsoever. [Apparently, the original also ends that way, so maybe Conan Doyle is the one to blame for that. That doesn’t make it any less stupid, though.]

But Stephen Fry is amazing as Mycroft. The dialogues are great, too and I really enjoyed the preplanned fight scenes again. In general I did like the film – I just expected a little more. 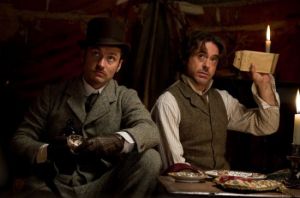