Plot:
Mikael Blomkvist (Michael Nyqvist) is a journalist in trouble. Not only has he just been convicted of libel, but the magazine he edits is experiencing financial difficulties because of it. But then he gets an offer from Henrik Vanger (Sven-Bertil Taube), rich retired business man. Vanger wants Mikael to research his great-niece Harriet’s disappearance 36 years ago, in the hope that he can discover something new. At the same time Lisbeth Salander (Noomi Rapace), young borderline researcher, gets the job to look into Mikael and his libel case.

Män som hatar kvinnor is a pretty good film that lives and breathes thanks to Lisbeth Salander as a character. Thankfully Noomi Rapace’s performance is strong enough to carry a film, or five.

The film was a bit too slow. Even though they tried to counteract that by speeding up the plot from the original length in the book, it starts to drag a bit.

But that is pretty much worth it for Lisbeth/Noomi Rapace. She was really impressive and just a very fascinating character. Michael Nyqvist on the other hand was not a good cast for Mikael. It’s not that he is a bad actor, not at all. But he just isn’t attractive enough for the role, I thought. Not that Mikael has to be good-looking, but he has to be attractive and Nyqvist, for me, neither has the looks nor the charme to make that work.

I dreaded the rape scene a bit and it was quite harrowing, though they were kind enough not to make it too detailed and grizzly. It’s bad enough as it is and definitely made for people with a good stomach.

The film stays very closely to the book, though they changed a few (rather unimportant) details. The only (rather minor) change I didn’t really agree with was that Lisbeth contacts Michael first – that doesn’t really fit with her profile, imo. 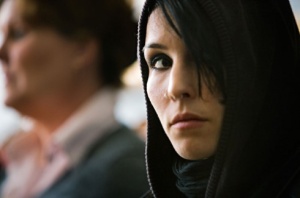 Summarising: I’ll be very interested to see how the American version differs from this one.