Plot:
Aung San Suu Kyi (Michelle Yeoh) thought she had left Burma behind. She built herself a life in the UK with her husband Michael Aris (David Thewlis) and her two sons Kim (Jonathan Raggett) and Alexander (Jonathan Woodhouse). But then her mother falls ill and she returns to Burma to take care of her. And suddenly Suu’s past catches up with her and she finds herself in the middle of the political change towards democracy in the country.

Aung San Suu Kyi is definitely a fascinating woman and Michelle Yeoh delivers a wonderful performance, but this movie has very many issues that pretty much eclipse those two facts. 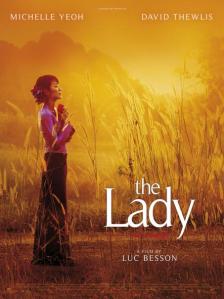 For a biopic about Aung San Suu Kyi, the film is surprisingly little about her. In fact, it seems to be more about her husband Michael and his attempts to support her. And, don’t get me wrong, Michael was probably the best husband you could wish for in the situation (and David Thewlis was great), but seriously – this movie is called “The Lady” and it makes it seem more like Michael’s accomplishment than Suu’s that she received the Nobel Prize.

And it’s not that I think Suu’s private life should have been left out – it’s perfectly alright to show her as a mother and wife and political activist. But I thought that the political activism got lost in her husband’s struggle with prostate cancer.

Another thing that absolutely drove me insane was the completely random mix of languages. I know that it must have been difficult for Michelle Yeoh to shoot a film in Burmese and I commend her for at least partly achieving it, but there were just really weird transitions to English all of the time where it just didn’t make sense that they would speak English in the first place.

But the film was lavishly shot and Michelle Yeoh, as well as David Thewlis were amazing, so the film is not a complete loss. But since I wasn’t convinced by the politics either (not that I know anything about Burmese politics but when somebody seems so incredibly perfect, I doubt things), that’s not much to go on.