Plot:
200  years after Ripley (Sigourney Weaver) died, a clone of her wakes up on a spaceship. But she’s not entirely human anymore. Instead the scientist have mixed her DNA with Alien DNA in an attempt to revive the Queen. And finally they have managed. As the experiments go on, a band of smugglers led by Frank Elgyn (Michael Wincott), come aboard to deliver something (or better someone). Among the smugglers is Annalee Call (Winona Ryder) who, it soon turns out, has her own agenda. And then everything quickly goes to hell.

Alien: Resurrection is not a very good film. There are moments where you get glimpses of Whedon’s sense of humor (which I probably only noticed because I knew Whedon was the writer) and moments where the themes that are explored get actually interesting, but they pass by way too quickly, leaving you with a so-standard-it’s-boring action film.

Both Ripley’s role as a mother, as a clone and her relationship with Annalee would have merited a much more detailed exploration than the movie gives it. But somewhere along the way it was obviously decided that the film needed action and a couple of illogical plot twists more than explorations of underlying themes.

And when that human/alien hybrid is born in the end, I just couldn’t help but laugh. At its design mostly – especially the puppy eyes beneath that bad-looking plastic skull. But also at its demise – the way it is sucked out into space through a teeny-tiny hole was equally disgusting and ridiculous (physically it may well be possible – I wouldn’t know – but it looked very funny).

That doesn’t mean that the movie doesn’t have entertainment value. Ron Perlman’s character is fun, Sigourney Weaver is great, Gary Dourdan is hot and the swimming aliens look fucking fantastic. And I liked that they included a character in a wheelchair, though also there they just could have done more with it.

But it’s one of these films where there’s so much potential just around the corner and frustratingly nobody ever gets there. 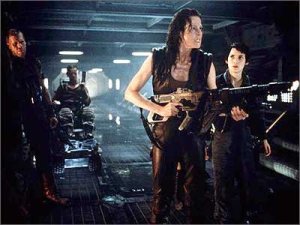