Plot:
Georgia (Georgia Groome) and her friends Jas (Eleanor Tomlinson), Rosie (Georgia Henshaw) and Ellen (Manjeeven Grewal) are very normal teenagers. Not particularly popular, but they do have each other. When two new boys  – Robbie (Aaron Johnson) and Tom (Sean Bourke) move to their town from London, Georgia is immediately smitten and her entire life starts to revolve around the plans how she could end up with Robbie. But in her obsession Georgia may lose touch with the more important things in life, like friends and family.

Angus, Thongs and Perfect Snogging is a funny, sweet, light-hearted film that will appeal to teens everywhere, especially girls. I think I would have loved it when I was 13. Now that I’m a little older, I still liked it a lot. 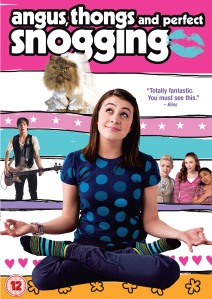 Georgia is a nice heroine for a teen novel. She’s smart, cheeky and a bit clumsy, but nothing overly so. I think that most teenage girls will be able to identify very well with her and her problems. Her character development is pretty classic and if you’ve ever seen a teen film (or read a teen book), you’ll know what happens. But that’s not necessarily a fault and the movie tells its story with charm, heart and a good sense of humor.

Plus, any film that lets its girls drool openly over guys (see pic below) and generally discusses the girls’ sexuality (as in, they also want to snog and worry about their capability – going so far as to visit a guy who offers snogging training) gets a plus in my book. It’s not the only thing they think about, the love and heart stuff is even more important, but at least there’s acknowledgement that girls have hormones, too (and not only the kind that make you moody). And Aaron Johnson repeatedly gets referred to as “Sex God”, which definitely gets my blessing. [Yes, I know that  he was only 17 when this was shot. Shut up.] 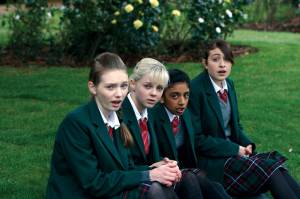 Anyway. The love and sex part is not the only thing the movie deals with, though. There’s of course the girls’ friendship (or at least Georgia’s and Jas’s – the other two are more supporting characters, popping up as needed). Georgia worries about her parents, with her father (Alan Davies) getting a job offer in New Zealand and her mum (Karen Taylor) probably falling in love with somebody else. Etc.

And all of that told with a nice soundtrack, an utterly charming cast and good pacing. I have to admit that in the end, I might have shed a tear or two just because of the sweetness of it all. 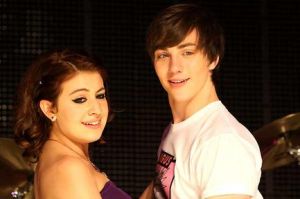 Summarising: Definitely recommended, whether you’re a teen girl or not. (But especially if you are.)