Plot:
Sara (Julianne Nicholson) recently broke up with her boyfriend Ryan (John Krasinski). To cope with the ensuing funk she starts an interview project she wants to use for her dissertation where she interviews various men or records conversations she overhears. The subjects of these interviews are varied but mostly they revolve around sex.

I thought that the film’s set-up was a little weird, focusing away from the interviewee’s and on to the interviewer as it does. That just didn’t work that well for me. But the cast was good and most of the respective interviews very nicely done. 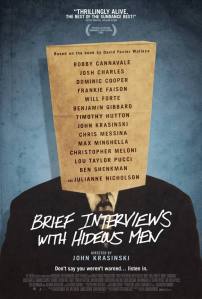 The interviews themselves are an unashamed and unabashed male view of the world and of (often) feminist topics. There’s no question about that. And usually I would have appreciated the introduction of a female perspective into the whole thing. But the way Krasinski tries to do that really didn’t work for me. Mostly because Julianne Nicholson’s Sara remains completely character- and colorless. Compared to the flamboyant stories and points of view the men around her get to have, she just seems dismissable. And that ultimately hurts the whole thing.

That’s especially apparent in the interview with Dominic Cooper’s Daniel which is actually less of an interview and more of a discussion. And not only doesn’t she get much to say (she only tries to make an actual argument once and that’s basically only to give Daniel a starting point for his story), Dominic Cooper steals the scene so hard from Julianne Nicholson that Sara had already lost before the whole thing started. It would have been better to not let her say anything than see her fail so pathetically.

I was a bit disappointed with John Krasinski’s monologue though. I usually like him a lot, but that, to me, was the weakest scene. Maybe he needs a director to lead him. In any case, the set-up of that part felt very wrong and Krasinski wasn’t up to par.

There were many things that I enjoyed, though. Will Arnett’s “interview” was fun. Josh Charles’s interview was even better. Christopher Meloni and Denis O’Hare both make brilliant assholes. And I enjoyed Max Minghella’s and Lou Taylor Pucci‘s “feminism-you’re-doing-it-wrong” conversation and the weirdly stalker-y way it was staged.

Put altogether it was an interesting piece of film, but not a total winner. 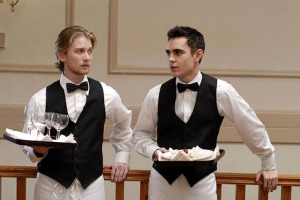