Batman Begins was about Batman and The Dark Knight about Batman’s counterpart(s). The Dark Knight Rises, though, is about what people in Gotham do with their belief in Batman, most notably in the characters of Gordon (Gary Oldman) and Blake (Joseph Gordon-Levitt). And that works surprisingly well, especially because both Oldman and Gordon-Levitt are freakishly amazing.

And I also really enjoyed Anne Hathaway’s Catwoman. She’s fun, she has her own agenda and she makes sense as a character. And Tom Hardy’s Bane was all he could be. Only Marion Cotillard’s Miranda/Thalia was a bit disappointing. That character just didn’t make any sense whatsoever. [Though for a second there, they really had me: After the rumors that Cotillard played Thalia, it wasn’t really a twist anymore. But when they first made it look like it was Bane who was Ra’s’ son, I really thought that they did the same to Thalia as they did to Barbara Gordon and dropped her for somebody with a dick, even though it doesn’t go with comic continuity.*] 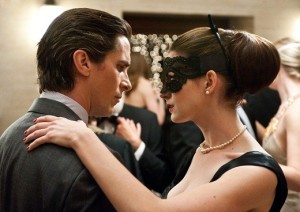 The movie ties up the trilogy in pretty much all aspects with a neat little bow on top, and sometimes it feels a little too neat**. (Alfred in the café in the end most of all.) But the film’s weakest point was, surprisingly, the script. There are just many little details that don’t really make sense and they went with it anyway. Like that Blake figured out Batman’s identity just like that. Or actually, that it’s only Blake who figures that out, even though Batman and Bruce Wayne disappear from public life at the same time, the re-appear at the same time. That Bruce needs a cane to walk, then wears a special leg brace for about 30 seconds and can walk again normally, so he can be Batman again and then public!Bruce also loses the cane immediately.*** Or the policemen who are trapped below ground for months and when they get out, they’re all still in top shape and not even dirty.

There’s been a lot of discussion about the conservativism of the film – and damn, that message is conservative. But blaming Batman for being conservative is like blaming Superman for being a patriot. Batman is every Republican’s wet dream – that is not news, that’s the way he was made. I love him despite that and not because I think he has a particularly liberal message.

Anyhoo. This review is already pretty long, so let me just say: I don’t think that The Dark Knight Rises is the strongest film in the trilogy but it works, both as a film and as an end and enjoyed the hell out of it.

Summarising: If you have any love for Batman, you’ll have to watch it. You won’t regret it at all.

*Talking about comic continuity: How awesome is it that they included Jen/Holly Robinson?! I mean, I love Juno Temple and would have been happy to see her in any role, but that it’s that role is just completely brilliant.
**Also, please tell me that I’m not the only one who giggled during the showdown because I suddenly thought, “Well, sometimes you really can’t get rid of a bomb, can you, Batman?”
***Actually, I appreciated that they tried to make Batman’s physicality more realistic with Bruce’s visit in the hospital where the doctor calmly lists everything that’s broken in him, but then they pretty much obliterated that effort with his miraculous recovery in that cellar prison (and the leg brace).