Plot:
Joe (Joseph Gordon-Levitt) is a looper – gangsters from the future send the people they wish to kill back in time, where the loopers dispose of them. The last person they will dispose of that way will be their older selves, and thereby fulfilling their contract. As it happens, most loopers’ contracts are starting to get closed. But when it’s Joe’s turn, Old!Joe (Bruce Willis) won’t play along and makes a break for it.

Apart from one inconsistency, Looper is an expertly crafted and engaging time travel story. While it is not the greatest film ever made, I did enjoy it a whole lot.

So, Young!Joe prevents Cid (Pierce Gagnon) becoming the Rainmaker because Old!Joe kills his mum (Emily Blunt). But Old!Joe wouldn’t know his mum, or even think about hit, if Cid hadn’t already become the Rainmaker. So either, Young!Joe’s self-sacrifice is the most pointless thing ever, making the ending way darker than it seems; or somebody didn’t really think things through. [Generally that theory is a bit too far from the mummy issues school of psychology.]

But as time travel stories usually are way more riddled with plot holes, I could live with that. I could also live the telepathy angle that just seemed a little tacked on and coming out of nowhere, but, you know, who says that you can only make one change when you change the future? 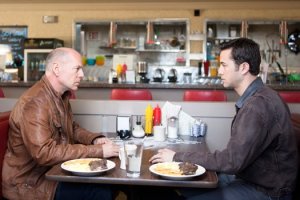 In any case, the cast was great. Admittedly, I had my problems with getting used to Joseph Gordon-Levitt’s make-up. In fact, I didn’t really get used to it. But other than that, he was great. I really enjoyed his interaction with Bruce Willis and how their character dynamic was handled. And Paul Dano was just perfect.

Rian Johnson has a good grip on tension and pacing; and the story really is engaging throughout. I had a really good time.

Summarising: Very good, though maybe not as fantastic as the hype would have you believe.