Plot:
Steve Rogers (Chris Evans) dreams only of one thing: he wants to be able to do his duty for  his country and fight in WW2. Unfortunately, he is small and sickly and is never accepted into the army, unlike his best friend Bucky (Sebastian Stan). During one last attempt to sign up, he meets Dr. Erskine (Stanley Tucci). Erskine is convinced he sees the right morality in Steve to take part in his experiment: Erskine is trying to develop a supersoldier. Steve jumps at the chance – but that’s only the beginning of his journey.

I had forgotten how bad this movie actually was. I mean, it’s entertaining and the cast is brilliant and it does have its funny script moments, but generally it is not a movie that is very thought through. 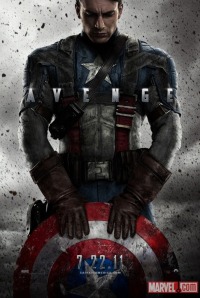 Chris Evans is great. He really is the main reason that this film works at all. He is funny (he makes the fondue line not only work but really good, for crying out loud), charming and brings the right mix of idealistic innocence and strength. Also, he’s just plain hot.

But of course, Stanley Tucci, Dominic Cooper, Hayley Atwell, Tommy Lee Jones and Hugo Weaving (who gleefully hams away) are all worth watching, too.

But the plot is pretty weak. During the action scenes I mostly tuned out. And [SPOILER] Bucky’s [/SPOILER] death didn’t work at all. Like at all. It didn’t touch me for a second. And there are so many crappy green screen moments, it’s ridiculous.

Nevertheless, it’s fun to watch and very entertaining. And the ending is heartbreaking, even on re-watch. 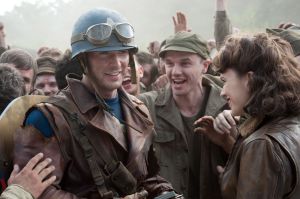