Plot:
M.K.’s (Amanda Seyfried) mother just died so he moves back in with her father Bomba (Jason Sudeikis), a very confused professor who is convinced that there are tiny people living in the woods and taking care of it. A theory that got him laughed out of every scientific community. But then M.K. discovers that he was right and finds herself caught in the middle of a struggle between the Leafmen who let the things in the forest grow and the Boggans who let them rot.

Epic was funny, totally sweet and very entertaining. I was very pleasantly surprised by the entire thing.

I didn’t expect that much from the film, actually. I don’t know why, but I thought that it would drift off into esoteric territory and/or complete clichés. And while it isn’t actually free of either, the esoteric stuff is not really relevant and the clichés are of the good, charming kind like the relationship between the Queen (Beyoncé Knowles) and Ronin (Colin Farrell).

Speaking of them: the Queen was most kick-ass. She was amazing. I loved her. I wouldn’t have minded if the entire film was about her. And Colin Farrell even manages to infuse a 10cm fairy with hotness. So yay?! 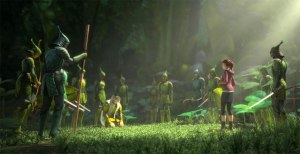 The cast was generally great, even if I was reminded again about how much I suck at recognizing voices. Seriously, people, it’s not even funny anymore. I only recognized Aziz Ansari and Chris O’Dowd (who were so much fun). Not even Christoph Waltz who has a very distinct voice…

And it was beautifully animated film to boot, with a really nice soundtrack – it was Danny Elfman after all. I really enjoyed it, even though the ending was a lot unhappier than they pretended.