Plot:
Dave (Aaron Johnson) is a normal teenager who likes to read comic books and gets beat up a lot. But then one day he decides that, actually, nothing is keeping him from donning a superhero suit and changing the world for the better. This seems to work fine for about 30 seconds and then Dave is in over his head.

Damn, I had forgotten just how fricking awesome this film is. I still have a couple of issues but I left the film absolutely hyped. It’s fantastic. 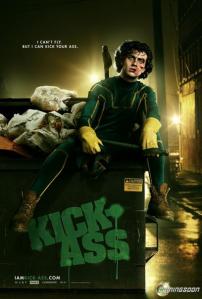 Before I gush about almost everything, let me point out the things that didn’t work for me. A) the ending still sucks. I mean it hurts the story that Kick-Ass uses a fucking bazooka to kill Frank D’Amico (and why is his name D’Amico and not Genovese?). I thought that it took the story in a wrong direction. And that Kick-Ass saves Hit-Girl was just wrong. Hit-Girl don’t need no saving and being carried off into the sunset. And I missed Mindy’s mom.

Generally most of the storyline changes from the comic – like Big Daddy’s backstory, and the fucking Katie storyline that is still so dumb – are for the worse in the film. (Red Mist’s story is debatable. Personally I don’t have a preference for either way that it’s played out. Both work for me.) But the movie does a better job of telling the stories than the comic, so I didn’t mind that much. Also, it felt like the film made more of Kick-Ass as a character, they got deeper into Dave’s head, than the comic. 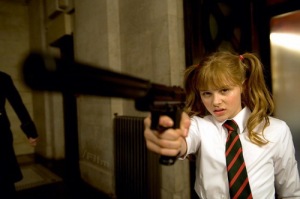 And we’re already smack-dab in the gushing part of this review. Matthew Vaughn is a fucking genius. The story-telling is pitch-perfect: the pacing is spot-on, the editing is awesome and best of all, holy soundtrack, Batman! It again hit me how great the soundtrack is. Not only are the songs themselves wonderful, they’re all used at exactly the right moment in exactly the right way. When Kick-Ass takes on the guys in front of the store, I had trouble staying in my seat – the tension was just so palpable.

And the cast is brilliant, too. Starting with Aaron Taylor-Johnson (who is still the sexiest teenager ever [well he’s not a teen anymore – which is good for my conscience – but he was back then and you kow]), who manages to keep Dave naive, despite all the violence and awful things, but also Mark Strong and Nicolas Cage who play their respective characters with so much relish, it’s a joy to watch. And Chloe Moretz is a scene-stealer par excellence.

I could re-watch it again straight away.