Plot:
Ray Breslin (Sylvester Stallone) works as a security consultant, basically: it’s his job to test prison security system by getting incarcerated and then breaking out. But his newest assignment doesn’t go as planned. He gets taken differently than agreed on, he finds himself facing the sadistic warden Hobbes (Jim Caviezel) instead of the person who knew about his real identity and the prison seems impossible to break out of. But at least he finds support for his breakout plans in fellow prisoner Emil Rottmayer (Arnold Schwarzenegger).

Escape Plan has all the markings of a craptastic film. And parts of it are as shitmazing as I expected them to be. But unfortunately I found myself pretty bored during most of the film despite that. 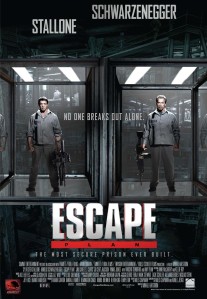 I am moderately certain that Chapman and Keller thought they were writing a smart film with a couple of funny lines. But pretty much everything clever Ray Breslin ever says is actually stupid beyond belief, if you look at it more closely. Admittedly though that was the biggest fun I had during the film.

The other things that entertained me were mostly due to Arnold Schwarzenegger. That dude has the art of not taking himself seriously down. Sly should learn from him. And then there’s this one scene where Arnie starts talking German and it is among the worst movie German I ever heard in my life. I had tears in my eyes and I still wonder what happened there. 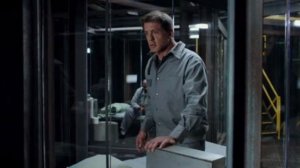 Not only did the plot make no sense at all, though, the movie was pretty boring and the over the top elements just weren’t enough to keep me entertained. And Jim Caviezel hams it up, which I would usually enjoy, if I was sure that it wasn’t an actual effort on his part to act well. But I’m not. I’m afraid he hammed by accident and that’s just not as fun.

All of that just meant that in the recent 80s action movie nostalgia series of films, Escape Plan is wedged firmly in the average and nothing to write home about in either direction.