Plot:
Victor Frankenstein (Benedict Cumberbatch) experimented around and managed to create a man (Jonny Lee Miller). Horrified by what he’s done, he leaves the Creature to his own devices. As he stumbles through the world, utterly forsaken, the Creature tries to find his place in the world, a place that is inexorably connected to the man who created him.

Frankenstein was an excellent production that looked great, was entertaining and very well-made. It has one big fault though, in the shape of a completely unnecessary rape scene.

I really loved the entire production design. The often minimalist stage design with sudden lavish elements – like the suddenly appearing train – was extremely evocative, as was the lighting which fit the music they used extremely well. It really gave the entire show a well-rounded feeling.

But what was even better than that was the cast. Jonny Lee Miller blew me away as the Creature, the way he used mimic and movement to develop the character was absolutely fantastic (kudos to Boyle on that direction as well). Benedict Cumberbatch was no worse as Victor Frankenstein, though it certainly was the less flashy role. [Interestingly enough, even before seeing this version, I could hardly imagine Cumberbatch as the Creature, though I’m sure that he would do a good job – it will be interesting to see it the other way round.] I also really liked Ella Smith, short as her appearances were. 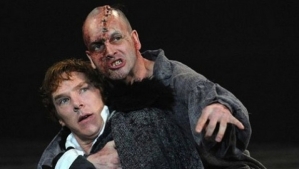 I haven’t read the book (I had planned to do so before seeing the film but I ran out of time), so I don’t know how the play holds up in comparison. But for the most part I liked Dear’s take on the story. The only thing that pissed me off was the rape scene. I don’t think it’s in the original, it doesn’t add anything to the story and it just made me angry that you have yet another thing where the rape of a woman is used to punish a man. If they’d stuck to the original murder, it would still be a woman dying to punish a man, but at least it wouldn’t be sexualized.

But other than that scene I could find no fault with the play or the production and I’ll certainly watch the other version, too.