Plot:
Bruce Robertson (James McAvoy) is every bad stereotype of a police man: he’s a misanthropic, sexist, racist, power-obsessed asshole who is supposed to investigate the death of a Japanese tourist. Instead he’d rather think about how to get the promotion to Detective Inspector, even though he doesn’t actually like doing his job. But Bruce is not only an asshole, all is not right with him in general. As his convoluted intrigues become ever more complicated, his mental state continues to deteriorate.

Filth isn’t always easily stomached and the ending didn’t blow me away, but other than that I really liked it. It was well-made, well-acted and kept you on the edge of your seat. 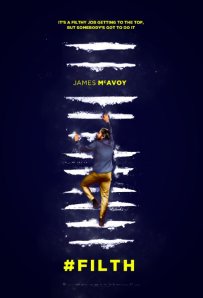 Bruce Robertson is not an easy character to pull off, neither for the writer, nor for the actor. He has no redeeming feature and even when you garner more understanding of how he got to be this way, that doesn’t excuse a thing.

But Jon S. Baird and James McAvoy do a really admirable job in slowly slicing away at Bruce until the power-hungry, controlling string-puller becomes an imbalanced, fragile, lonely and very ill person. What remains is the question of whether Bruce deserves our sympathy, but he certainly had it in my case in the end, despite of everything he did.

When I saw the film I was only halfway through the book, but I really liked how Baird translated the book to the screen. And it was more a job of translation than of adaptation because there are certain things in it that wouldn’t have worked on screen at all. But Baird takes exactly those things and makes them a very visual equivalent – especially when it comes to the scenes with Rossi (Jim Broadbent) or the animal heads.

But the film certainly isn’t very easy to take. It definitely should come with a trigger warning and I’m not so happy with [SPOILERS] the whole cross-dressing because of craziness thing. As if cross-dressing itself was a sign of insanity (it’s not that clear-cut so I’m not totally angry about it, but still). Plus the ending with Mary and her boy calling on Bruce was a little too much. It smacked of “if he had only held on for a little bit, the woman to safe him would have been right there” and that’s no good. [/SPOILERS] But all of that is made up for by the rest of the film, so I really can recommend it with a good conscience.

Summarizing: Be prepared but watch it.