August: Osage County isn’t always easy to watch but it is always well-acted and engaging. Toward the end I thought that it got a little much but altogether it was a really good film.

When you get a cast like this together, basically all you have to do is to lean back and let them do their thing and it’s probably going to be awesome. And I was really impressed by all of their performances, especially Meryl Streep (of course) and Julia Roberts, who really does get better and better.

Most of them get to work with pretty brilliant characters, too. It’s only Misty Upham who gets the short end of the stick, I thought. Her Johnna never gets much of a personality from the script (in the few moments she does get to be more than subservient, she is brilliant though). 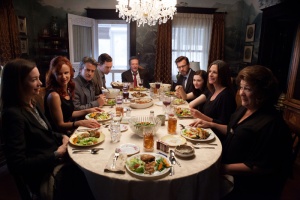 I loved the dynamic between the sisters, the sense of humor that was suffused in the entire script, no matter how dire things got and the film really had some outstanding scenes that will stick with me for a while (like, as absurd as it may sound, the fight between Barbara and Bill [Ewan McGregor) in all its restraint and banality).

The only thing that didn’t work for me was the [SPOILER] incest angle. [/SPOILER] I thought it was just a bit too much. But not unforgivably so and I didn’t mind for very long. I don’t know if it’s fair to say that I enjoyed the film, because I generally don’t enjoy watching people tear into each other, but it was excellent.

Summarizing: very much worth seeing.