Plot:
Mick Taylor (John Jarratt) is hunting again. Whether it be backpackers like Katharina (Shannon Ashlyn) and Rutger (Philippe Klaus), or just somebody driving by and getting caught up in things like Paul (Ryan Corr) – Mick doesn’t discrimate. And he can’t be stopped.

Wolf Creek 2 felt like an unlovingly painted-by-the-numbers sequel. It didn’t feel like anybody involved actually wanted to make a sequel. Apart maybe from John Jarratt – Mick seemed to be having the time of his life. 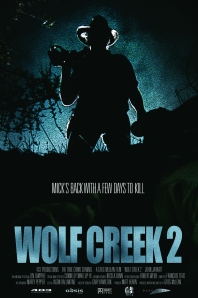 I don’t think that every movie has to be the director’s current heart project or a labour of love. Neither do I think that a film has to be entirely realistic. But I want to feel like somebody cared enough about the film to at least consider whether or how something (that is set in the real world, without magic or fantasy elements) might actually be possible. Or at least, good storytelling. I did not get that feeling here at all.

There were huge gaps in the logic. There was not a single character I cared about, especially since the film doesn’t take the time to really introduce them (the part I liked most about the first one, though it seems that many other people did not). And as soon as they get into the mines/cave system/cellar/Mick’s layer, my suspension of disbelief snapped completely.

Which is too bad because MIck is a great character and I love John Jarrat’s performance. I even liked the dialed-up sassiness, though I’d understand if that took away from Mick’s character and especially his scariness for other people. For me, since Mick already wasn’t scary anymore, the moments were he makes stupid jokes about the owner of the lungs he is currently carving out of a chest being a non-smoker, were the best moments of the film.

But altogether it falls in the category of entirely unnecessary and apparently unwanted sequels. Even if there are beautiful images of Australia to look at before the entire thing moves underground.