Plot:
Carlos (Joan Bentallé) likes to go cruising in the woods. In a busy spot he meets one of his students – Toni (Aimar Vega). Carlos and Toni end up having sex, which was a one-time thing for Carlos, but not so much for Toni. So Carlos gives in to him again. But sex isn’t the only thing that is happening in those woods and Toni’s desperate love is soon headed for extreme measures.

Amor Eterno is a beautiful film, but since it desperately tries to sell the dysfunctional relationship between Carlos and Toni as romantic, it failed for me.

When you tell the story of a romantic relationship turned dark, you have to make damn sure that there is actual romance in the beginning. What we get here instead is a teacher taking advantage of his underage student and said student’s feeling for him, with the teacher consistently showing a callous disregard for anybody but himself and even egged on by his best friend and colleague. That doesn’t spell romance for me. When that student becomes obsessed with his teacher, it doesn’t become any more romantic.

With that central concept falling so completely flat for me, the movie falls completely apart. There were still moments that I enjoyed – like the mini music videos/performances that were built into the film for no apparent reason other than they’re really cool (especially the first one where Toni dances really struck a chord). 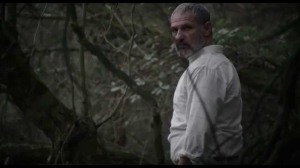 The camerawork was also fantastic, with beautiful shots and an impressive sex scene that is shot without cuts, starting in a total fram and moving ever closer towards the car where Carlos and Toni have sex, pushing its way into their intimacy as if it was a third partner in the scene.

The final twist was completely obvious to me though, with plenty of hints to foreshadow it, but stilll leaving a bit of a question mark as to what it actually means and how it actually works. I probably would have liked it better if they hadn’t tried to surprise us with that and instead taken actual time to explore the details of that… let’s call it culture. As is it didn’t really grab me.