Plot:
Caleb (Domhnall Gleeson) can’t believe his luck when he wins the employee lottery and will be allowed to meet the company’s – Bluebook, a search engine and more – owner, the reclusive genius Nathan (Oscar Isaac). And not only meet him – they will get to spend a week together in Nathan’s home, working on a project together. When Caleb arrives, Nathan announces that he has been working on an AI – and he wants Caleb to test her, Ava (Alicia Vikander), to see if she can pass as completely human. But the more time Caleb spends with Ava, the less he trusts Nathan and his intentions.

Ex Machina is great. Smart, political and surprisingly feminist science fiction, beautiful images, excellent script and a wonderful cast. I was blown away by it. 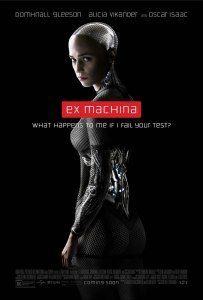 Ex Machina could have gone very differently – it starts out, after all, with two guys constructing a woman (who is beautiful, flirts and can have sex) and testing her whether she is good enough. But Garland goes ahead and turns the entire concept on its head. Nathan is soon revealed to be a disgusting asshole who wants to build a perfectly controllable plaything for himself. But even Caleb who seems to be the nice counterweight to Nathan at first, is shown to be just as unwilling to see Ava for who she really is because he wants her to be the perfect – and perfectly nice – woman of his dreams, a pristine thing that he can be the hero for and rescuer of. And Ava sticks it to both of them. She isn’t interested in romance or sex, she wants to be free and experience the world, not sit in a lonely prison cell. And she will take any way out that she can get.

With that narrative, Garland perfectly shows two very prevalent ways men try to diminish women – and shows how toxic both are. Nathan’s sexism is obvious. But Caleb’s nice guy sexism is more insidious and shown much more rarely, so it’s pretty great to get that too, especially since it’s also contrasted with a scene between Kyoko (Sonoya Mizuno) and Ava – the only scene of genuine care, I’m even tempted to say humanity. 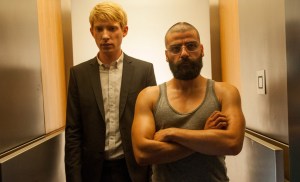 Garland packs all of that in a well scored, beautifully shot film with an awesome set. Not only the house itself – though that is really cool – all the other things as well: Ava’s glass prison, her face mounted like a trophy on a wall, the other robots Nathan built like dolls in boxes or even graves, still at the mercy of Nathan’s glances and his desires.

Domhnall Gleeson and Oscar Isaac are perfect in their roles at either end of the sexism spectrum (and the dance scene with Oscar Isaac and Sonoya Mizuno was one of the most impressive dance scenes I’ve ever seen). But neither is as perfect as Alicia Vikander who steals every scene she’s in. But not only the cast, the film is as close to perfection as any movie is likely going to get.

Summarizing: Not to be missed.