Plot:
In the 60s everybody was excited about technology, above all Frank (Thomas Robinson) who tried builds his own jetpack for the World Fair. Even though the jetpack doesn’t work, it catches the eye of Athena (Raffey Cassidy) who changes Frank’s life forever.
50 years later the scientific enthusiasm of the world seems to be mostly gone, although there still are people like Casey (Britt Robertson) who dreams of becoming an astronaut and does everything in her power to stop the dismantling of a NASA launch site in her area – which leads her straight to prison. When she’s released, she finds a pin in her possession. A pin that shows her a beautiful utopia, one she’s convinced is real. And her search leads her directly to – by now adult – Frank (George Clooney).

Tomorrowland was a sweet film. Not great, but sweet, with a couple of moments that were quite frankly flabbergasting in their stupidity. 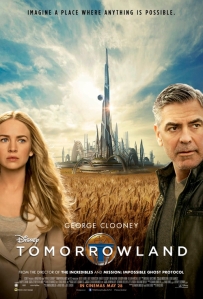 Tomorrowland’s biggest problem is that the plot doesn’t make much sense if you stop to think about it for a couple of minutes. Or rather it doesn’t work like it’s intended to work. The audience is expected to feel for Frank and Casey and their desperate attempt to get to Tomorrowland, to hope that they make it there. But I could only marvel at the absolute snobbery and elitism of the idea of Tomorrowland in the first place that I couldn’t understand why none of the supposedly smartest people in the world ever went, “hang on a second. Maybe it’s not a good idea if we siphon off all the smartest people and leave the rest of the world to fend for itself. Nevermind the fact that whatever utopia those exiled smart people come up with, necessarily excludes the needs, perspectives and experiences of people who aren’t so smart, but who make up the majority. Maybe it would be better if we built a better world together, instead of having a chosen few patriarchially decide for everybody else.”

They could have made a point of challenging the elitist structure underlying the concept of Tomorrowland. But instead the take-away we get is that the leadership of Tomorrowland just isn’t benevolent enough, that they don’t take proper care of their people. They’ve grown full of contempt of the people they’re trying to protect. If somebody without contempt takes over, everything will be fine and dandy. That means that the wrongs of the leadership are pointed out by the film, but not the faults of the concept itself, making the entire thing pretty hollow.

There were a couple of smaller things as well – the movie’s insistence of damning dystopias, as if dystopias functioned as future goals instead of warnings where the future might end up. Or the fact that the boys who play young Frank [perfectly casted as Thomas Robinson does look like Clooney a lot] and Casey’s brother Nate (Pierce Gagnon) looked so much alike that I though for a second they were played by the same actor – which confused the hell out of me.

But despite all of that, the film was entertaining enough and did some things extremely right – both of these points have mostly to do with Athena and Raffey Cassidy’s wonderful performance. I kept waiting for the relationship between Athena and Frank to turn creepy, but somehow managed to never push it too far.

Generally I enjoyed the film (despite the unfortunate yellow filter employed which was a weird artistic choice or a cinema fuck-up, as our seat neighbor seemed to think) and the pacing was so well done that most of the issues only cropped up after we were out of the theater.