Plot:
Lincoln (Ronen Rubinstein) has been taking abuse his entire life. From his father, from his class mates. After his fuse finally blows, he is sent to a school/institution that tries to reform criminal teenagers. Soon after his arrival there, Willie (Maestro Harrell) and his cronies start bullying Lincoln again. When Lincoln desperately hides in an abandoned shack, he summons Moira (Sierra McCormick) who takes it upon herself to avenge Lincoln.

Some Kind of Hate started off well enough but as soon as the film turns into a ghost story, it completely falls apart unfortunately.

Here’s what I loved about the film: I loved that we got a guy like Lincoln as the (first) bullying victim: He might be socially awkward and listen to metal music, but he’s tall, well-built and good-looking. He desperately tries to do the right thing and not engage with his bullies – which is what everybody always says is the ultimate solution when it comes to bullying: ignore it and it will go away. But when he cracks, he cracks with a vengeance and stabs his tormentor with a fork. So you have this guy who is perfectly capable of handling himself physically. Nevertheless he is being bullied, he is scared, he is insecure and he really tries to do well, but when you’re alone, you don’t really stand a chance against the bullying.

That part is wonderfully captured by the film and adequately portrayed by Ronen Rubinstein, who could have probably done better with a better director. But Mortimer is too obvious and too on the nose when it comes to the actors, making most of them overact incredibly, ultimately turning even the theoretically most touching scenes into laughable affairs.

But that isn’t the film’s only problem. There’s also the fact that as soon as Moira enters the story, it stops making much sense. That is particularly galling because she was so completely unnecessary to anything at all, really. I’m also extremely unsure what the take-away of the film is supposed to be: Bullying is bad because it ultimately turns the bullied into monsters and if it happens to you, you should best just lie down, take it and sacrifice yourself, so as not to perpetuate the circle of violence?

That is the kind of absurd message that you will get if you completely take the institutional side out of the equation. Bullying is not so much the problem of some sick kids tormenting some poor victims, it’s a problem of institutional structure that facilitates violent power struggles and doesn’t step up to put a stop to it when needed. That is a very simplified statement, but the film doesn’t even have that much insight into the matter. The result is a film that reaches too far, both in topic and in its story, and creates quite a mess. 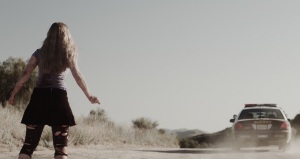 Summarizing: In this case, I’d have preferred the classic evil institution plotline than the novel ghost story approach.