Plot:
Author McRain (Gareth Lawrence) comes to Finland to finish his next novel in peace. But he never gets a chance as he’s kidnapped and experimented on. As a result, he is turned into a human-sized bunny with a huge dick and an even bigger thirst for pussy. Relentlessly searching for people he can rape and kill, he stumbles upon a group of friends who are partying at a remote cabin.

For the past few years I have bought the All You Can See pass for the /slash Filmfestival, which gives you a ticket for every screening they have. For me that meant seeing all the films that I can possibly squeeze in and not worry about contents at all. Since I don’t even like to watch trailers and I like being surprised by films, that is a system I’m usually very happy with.
But every once in a while it backfires. Case in point: Bunny the Killer Thing. What I heard about the film in advance was that it’s about a bunny who wants to eat pussy. That, to me, doesn’t immediately scream rape (which might have been naive). But if I had known that the film was 90 minutes of a rape joke (and the bunny isn’t the only rapist in it), I probably wouldn’t have watched it, especially since this year’s /slash was kinda heavy on the rape anyway. 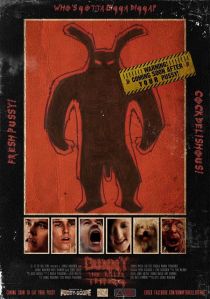 I can confidently say that I’m not the target audience for the film since I don’t think rape is such a funny thing. And what we have in this film is sexual violence and rape on many different levels and all are not particularly well-handled.

The most obvious level is of course the sex-crazed bunny that runs around raping and killing whatever he can get his hands on and that is supposed to be funny because it’s a bunny doing the raping. That absurdity is not in itself funny to me. Add to that, that the Bunny only rapes pussies (or what it perceives as a pussy) which gives the entire thing an even more misogynistic undertone.

But there’s also the fact the Bunny is the result of a medical experiment, designed to turn celebrities into sextoys (why they also have to be turned into bunnies, I’m not exactly clear on, apart from the obvious Playboy connection). By making them insatiable on a biological level, all ability to give meaningful consent is taken from them, they become will-less, literally not-human objects, making the bunnies victims of rape as much as the one bunny who manages to get away is a perpetrator. That reveal was the best thing about the film, but unfortunately, the movies spends no time whatsoever on it. We discover this missing bit of information, and the protagonists already start shooting everything in sight, apparently making no distinction between bunnies and bunnyrapists and then it’s over. 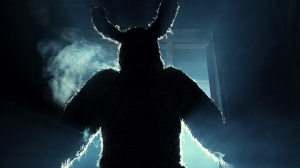 But there is yet another instance of rape in the film: one of the protagonists, Nina, is in love with Sara who is not interested in women. Nina drugs her, then assaults her, not knowing that she is being watched. When Nina is done and Sara comes to, she is informed by the watcher of what happened and both watcher and Sara are appropriately shaken by the experience. So far, so good. Unfortunately, the assault itself was filmed in such a suggestive, voyeuristic way that it was clearly meant for straight guys to get off, completely ruining any outrage that might have arisen.

Add to all those rape instances that there is a note of queerbaiting to the relationship of Mise and Tim, with a bit of racism and fetishization of black people mixed in for good measure, and you have a film that pushes all of the wrong buttons for me, despite a few good moments.