Plot:
Helen (Virginia Madsen) wants to write a thesis about urban legends. Among them, the legend of the Candyman: if you say his name five times into the mirror, he will come through it and kill you. Her research takes Helen to a run down apartment complex that have been haunted by a series of murders. Bit by bit Helen comes to believe that the Candyman actually exists.

I already liked Candyman when I saw it the first time, but I think I liked it even better the second time around and I loved getting to see it on a big screen.

Bernard Rose was a guest at this year’s /slash Filmfestival and hearing him talk about the film before the screening was quite interesting. He talked about the housing complex this takes place at, which was fascinating. And he said that The Candyman was the only black villain in a horror movie to this day. Since my horror history is quite spotty (I discovered my love for horror movies late into the game), I thought that I just didn’t know any other black villains, but once it is stated this directly, it becomes perfectly obvious. (There was also this article published only a short time after I saw the film again.)

Framed by this thought, it is not only amazing that neither Candyman nor any of the other black people in the film become racist stereotypes, I actually liked Candyman’s backstory much better this time round than I did the first time: Candyman becomes the perfect metaphor for the great injustice and brutality inflicted on slaves that still haunt us to today. Every once in a while this huge past trauma comes lashing out in a world that still doesn’t acknowledge the suffering it is still handing out to black people. (Although I am uncertain about the layer of black man who seduces white woman meaning her harm that is also in there and not quite as progressive as the rest of the film.)

But Candyman wins not only on a political level, it is simply a strong horror movie: atmospheric, moody and tense. It’s scary and even though it features some jump scares, which usually screams cheap thrills, all of them are organically embedded in the film’s atmosphere, making them an extension of the fear the film provokes and not a desperate attempt to create it.

And to round it all off, Phlip Glass’ soundtrack gets better and better the more attention I pay to it. It doesn’t really get much better than this. 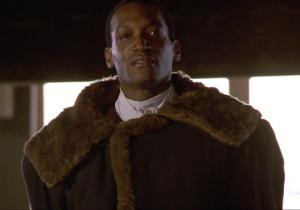