Tales of Halloween
Part of: /slash Filmfestival
Seen on: 25.9.2015
[Reviews by cornholio and Maynard.]

Plot:
Tales of Halloween is a horror film anthology with 10 short films, all taking place on the same Halloween night, framed by the narration of a radio DJ (Adrienne Barbeau).

Tales of Halloween is an enjoyable collection of segments that makes time fly by. I especially enjoyed how interconnected the segments were, using the same set and often the same extras as well. Not all segments were equally strong, but altogether, it’s a great film. 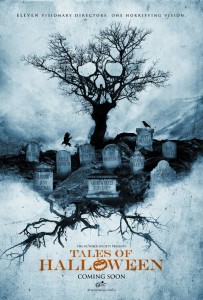 After the jump, I’ll talk about each of the segments separately. And since the film is filled to the brim with cameos and familiar faces, I have pointed them out as well, at least as far as I could place them.

Sweet Tooth
Director: Dave Parker
Writer: Dave Parker
If you don’t share your Halloween candy with Sweet Tooth, he’ll come to get it out of your belly. Or at least that’s the babysitter’s story.
This segment was a fun, gory, gleeful start into the film and nicely set the tone. The make-up was great as well.

The Night Billy Raised Hell
Director: Darren Lynn Bousman
Writer: Clint Sears
Cast: Barry Bostwick, Ben Woolf
Billy is dared to trick the grumpy Mr. Abbadon (Barry Bostwick). But in the end, it’s Abbadon who teaches Billy about tricking people.
This segment was overall very enjoyable, though I wouldn’t have minded if the had foregone the sexist remarks Abbadon spews all the time. Due to casting choices, the twist ending was rather clear to me, but it was still enjoyable.

Trick
Director: Adam Gierasch
Writer: Greg Commons
Cast: Greg Grunberg
A group of adult friends hang around, waiting for trick-or-treaters. But the trick-or-treaters have their own agenda.
This segment really managed to surprise me in a very good way, although the solution at the end made it less fun than the segments so far. What was fun, though, was the nod to the pirate costumes.

The Weak and the Wicked
Director: Paul Solet
Writer: Molly Millions
Cast: Booboo Stewart, Grace Phipps, Noah Segan
Alice (Grace Phipps) has been terrorizing Isaac (Booboo Stewart) ever since they were children. But now Isaac has a plan.
This segment was okay. It was a little too cartoonish – I would have liked it if it had been grounded a little more in reality. But at least we got a female villain who was evil, but not sexily so. 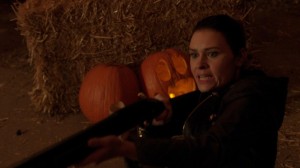 Grim Grinning Ghost
Director: Axelle Carolyn
Writer: Axelle Carolyn
Cast: Alex Essoe, Lin Shaye, Lisa Marie, Barbara Crampton, Mick Garris
A young woman (Alex Essoe) makes her way home alone at night.
This segment doesn’t exactly tell a new story, but it does tell it well, creating good tension and managing to include a jump scare as payoff and not only for its own sake.

Ding Dong
Director: Lucky McKee
Writer: Lucky McKee
Cast: Pollyanna McIntosh
Each Halloween a wife (Pollyanna McIntosh) is overwhelmed once more by her desire for children that she can’t have. Her husband tries to make the best of the situation.
I’m a sucker of Lucky McKee, so I might have been a little biased here, but I loved this segment, even though it’s tonally quite different from the rest of the film. Pollyanna McIntosh is amazing and they manage to handle her character’s child wish without falling into the usual traps. And they tackle a difficult topic [SPOILERS] – domestic violence – [/SPOILERS] with a surprising amount of sensitivity without losing their sense of humor.

Friday the 31st
Director: Mike Mendez
Writer: Mike Mendez, Dave Parker
A man chases a woman through the woods but things don’t quite turn out as expected.
This segment starts like a billion horror movies, but it doesn’t end there. While the twist doesn’t actually go very far in its subversion of tropes, I did enjoy it and the animation part was really sweet. 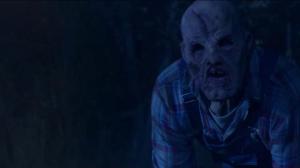 The Ransom of Rusty Rex
Director: Ryan Schifrin
Writer: Ryan Schifrin
Cast: Ben Woolf, John Landis
Two men decide to kidnap a rich man’s son while he’s out trick-or-treating but things don’t go as planned.
This segment was fun. It didn’t blow my mind, but it surprised me and it very much entertained me.

Bad Seed
Director: Neil Marshall
Writer: Neil Marshall
Cast: Kristina Klebe, Pat Healy, Joe Dante, John Savage
A man-eating pumpkin terrorized the town, and only Det. McNally (Kristina Klebe) can stop it. Or at least try.
This might be the funniest segment of all. An excellent spoof of police procedurals with nods in many directions. The ending wasn’t amazing, but very fitting.

Summarizing: You could do much worse than while away the hours with this film.