Plot:
Kent (Andy Powers) and his wife Meg (Laura Allen) have organized a clown for their son’s birthday party. But that clown cancels and they are left in quite a bind. Real estate agent Kent finds a clown costume in one of the houses he is supposed to sell and decides to put it on to make his son happy, which works like a charm. But when he tries to take it off again, he is unable to do so. The costumes seems to be doing something to him.

Clowns is built on a nice idea and excellent make-up, but storywise it did start to drag. Maybe if clowns were scarier for me, I would have been more into the film. But as is, I thought it was rather average and it left me quite cold. 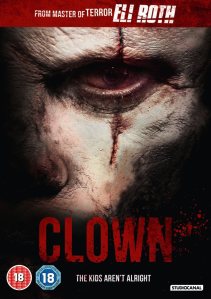 The most outstanding part about Clowns was certainly the make-up. Generally how the clown costume was designed was already great but how Kent slowly transforms was a thing of beauty. The gore effects were also really nice. Visually the film just has a lot to offer.

It’s also great whenever it’s funny. Some of the best things I’ve ever seen were Kent’s suicide attempts. Starting with rainbow blood to a fascinatingly creative self-decapitation device, it’s dark humor at its finest. 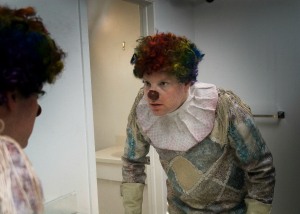 But unfortunately the movie doesn’t want to be funny nearly often enough and whenever it tries to be serious, it starts to get boring. I was not interested in the family drama and only very little interested in the moral struggle.

It’s not that I hated the film. And Peter Stormare was great, as usual. (Generally the cast was very nice.) I just didn’t get into it. So little so that I barely reacted to the (few) jumpscares they included, nevermind that I got actually afraid. But for the most part, Clown was entertaining enough.