Plot:
Angela (Emma Watson) has accused her father John (David Dencik) of abusing and raping her. While Angela remains at the church where she sought refuge, police detective Bruce (Ethan Hawke) tries to figure it out. But John claims to have no recollection of ever assaulting Angela. So Bruce looks to psychology professor Kenneth (David Thewlis) for help. Kenneth suggest hypnotic regression therapy to figure out what is going on. Soon Bruce finds himself deep into a farreaching network of satanistic abuse.

I suspect that I would have liked Regression if the general plot development hadn’t been so completely clear to me from the start. Although even so it wouldn’t have been completely unproblematic.

If you’ve ever heard of regression therapy, chances are that you’ve heard that it’s an excellent way not to uncover hiddne memories, but to implant fake ones. So the title alone is a bit of a giveaway, the way they go about the therapy eve more so. Because if you got half an eye for these things, you can see how every “discovery” comes from the therapists/the police men first, who in turn have it all from Angela. (Scriptwise this is beautifully done.)

And while I did appreciate a film that doesn’t fall back on the supernatural explanations, that shows how widespread panic can come from practically nothing, the explanation that Angela is the root of all evil also transforms the film into a movie where the only significant female character is a lying, manipulating bitch who causes everyone around her grief to no end and literally threatens an entire community with her scheming. And that just plain smacks of misogyny. 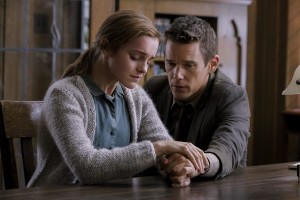 If I hadn’t called the big plottwist about five minutes into the film, before we ever even saw Angela, I can imagine that I would have liked the film much better. Instead I kept waiting for the characters to finally catch up with where I was and that just made the film feel so much longer than it actually was. (Despite my joy at seeing Aaron Ashmore and Aaron Abrams in small roles.)

As such, Regression falls into the Shyamalan-trap, hinging too much on a plot twist, so that it just doesn’t work anymore if you guess the twist too early. I expected more of Amenábar.