Plot:
Herman Melville (Ben Whishaw) finds the last survivor of the Whaleship Essex, Thomas Nickerson (Brendan Gleeson) and interviews him about what happened out there. Nickerson tells him how Owen Chase (Chris Hemsworth), who was promised a capitaincy by the whaling company, gets sidelined in favor of George Pollard (Benjamin Walker), an inexperienced young captain who brings the right pedigree to the table. Chase is pressured into being Pollard’s first mate and despite strong tension between the two men, they set out to go whale hunting. But pretty much everything that can go wrong on the whaling trip, does.

When I saw the first trailer for In the Heart of the Sea, I thought that it was actually a prequel movie for Moby Dick. Turns out, that’s not true: instead it’s the fictionalized story of the real life ship wreck that to some extent inspired Melville to write Moby Dick. And while I don’t care much for Moby Dick itself, so I have the suspicion that I wouldn’t have liked a prequel story better. At least if it was a boring reiteration of a story we’ve seen a million times alread like this film turned out to be.

Ron Howard apparently set out to find out how boring and slow you could make a film that features a muderous, monstrous whale. The surprising answer is that it can really get very boring. It is no surprise that I used to word three times already in this review. I wasn’t entirely sold on the concept from the beginning, but I figured Howard usually makes entertaining films and the cast is good, so why not give it a try?! In any case, a whale action spectacle should be fun. Turns out it wasn’t.

From the framing device – unnecessarily dragging Melville himself into the story which just added even more time to the story (sorry Ben Whishaw, Brendan Gleeson, this has nothing to do with you) – to the story of the hardworking farmer who gets bested by an evil corporation in favor of the man with the right family man, there is nothing that we haven’t seen before. 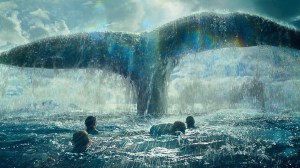 Finally, when the shit really hits the fan (or the whale really hits the ship in this case), things get repetitive quickly, there is no sense of tension and even though the cinematography is rather nice, the images it creates are so cheesy that I just wanted the film to be over.

It’s a movie that has about as many creative thoughts as it has women. And since it has two women in speaking roles (both get to be concerned wives), you can imagine what a mess that makes it. 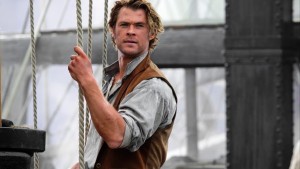