Plot:
Sherlock Holmes (Ian McKellen) is getting old. His mind starts failing him, but he knows that he still has one last open case that he wants to finish. So from his quite farmhouse, where he lives with the housekeeper Ms Munro (Laura Linney) and her son Roger (Milo Parker), he tries to comb his memory for the clues he missed back then. Curious Roger meanwhile manages to become a kind of confidant for Sherlock as they tend to the bees together and Sherlock tells him everything he remembers about the case.

Mr Holmes wasn’t bad, exactly, but it was pretty boring and rather sexist, so the good parts of the film didn’t really work out for me either.

I don’t mind soppy stories, and Mr Holmes certainly is one of those. I like the idea behind the film, despite not being a huge Sherlock Holmes fan myself: what happens when a man who has always defined himself through his mental abilities, notices that his brain starts to fail him? Ian McKellen beautifully portrays the struggle that ensues, his fight for the last bit of his sanity without realizing how far gone he actually is. It probably wouldn’t have been even better if he hadn’t been able to solve the case, if he just got worse and worse but that would have gone completely against the saccharine tone and ending the movie aspires to.

What I do mind, though, is a film that barely has any female characters in the first place and the one it does features are treated horribly. One – Ann Kelmot (Hattie Morahan) – is literally a mystery to be solved, the other – Ms Munro (I don’t think she even gets a first name – gets completely devalued both by the story and by the alliance that forms between Holmes and Roger, often against her and her wishes. No decision she makes is accepted – be it that she doesn’t want Roger bothering Holmes or her decision to escape the insufferable asshole that is Sherlock Holmes and his consistent abuse by accepting another job. 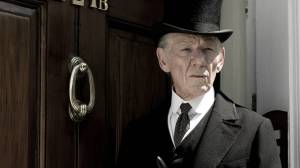 Additionally the story becomes quite lengthy around the middle. The entire Japan plot line felt superfluous, bloated the film (even though I did enjoy Hiroyuki Sanada) and didn’t really add anything of substance to it.

It’s not the worst movie I ever saw. But it never managed to unstick itself from the course of pure kitschy sweetness enough to actually tell a story worth watching. Despite the awesome cast.