Plot:
Sebastian Valmont (Ryan Phillippe) and Kathryn Merteuil (Sarah Michelle Gellar) are step siblings, united in their love to manipulate and destroy the people around them, a skill they have so artfully mastered that their ploys don’t fall back on them. Both have a new project: Valmont is trying to seduce Annette Hargrove (Reese Whitherspoon), the new principal’s daughter, who is widely known for her chastity pledge and that before school starts. Kathryn, on the other hand, is looking for revenge on an ex-lover who just dumped her for the naive Cecile (Selma Blair). So she enlists Valmont’s help to completely corrupt Cecile.

I was 14 when Cruel Intentions came out, 15 by the time I saw it the first time and I think that it is one of the defining teen movies of my generation. That doesn’t necessarily mean it’s a good film, though it definitely does have its strengths, but it is very hard to view it separately from its influence.

The most striking thing about Cruel Intentions is its soundtrack which is as close to perfect as you can possibly get. The music fits the film, but even more so, it’s an excellent album, perfectly capturing the time and it’s one of the soundtracks I return to most often. It’s simply excellent.

The second most striking thing about the movie is how little they had to change from the original story to make it work in present time. While men get around basically scot-free, women still have to guard their virtue, and can either opt to be chaste or to wield their sexuality as a weapon, at least if they want to have any kind of control. If women weren’t expected to be pure and clean and sexy but unsexual, the film would pretty much fall apart. It doesn’t, though there is a pathos about it, especially towards the end, that doesn’t feel quite right.

Kumble makes some updates through a couple of nice touches – including racism, for example, but the updates don’t always work: his treatment of homosexuality is less than, let’s say, refined – the kiss between Kathryn and Cecile is completely male gazey; Joshua Jackson’s Blaine a walking stereotype. And the film does seem to take a lot of joy in dismantling and punishing Kathryn, reverting to the original novel’s misogyny – which I could have done without.

So, I certainly do have my issues with the film (most of which are centered around Kathryn and how she’s portrayed and treated), but he touched a nerve when he came out and I can still feel that nerve tingling when I watch the film. There’s something there. 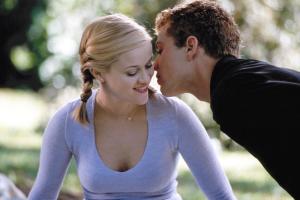 Summarizing: if you aren’t of my generation and haven’t seen it as a teenager, it’s entirely possible that you won’t find anything in this film. But I’d recommend watching it anyway.