Plot:
Flight attendant Lena (Emma Watson) comes to Chile knowing that she has a couple of days until she has to fly back. She meets up with Daniel (Daniel Brühl), a photographer who is involved in the socialist movement in Santiago. But while the two enjoy their time together, a military coup happens and Pinochet rises to power. Suddenly Daniel’s political activism is a huge security risk for both of them. Daniel is promptly abducted. Lena manages to find out that he must have been brought to the Colonia Dignidad, a sect/military prison nobody gets away from, run by Paul Schäfer (Michael Nyqvist). Desperate and without receiving any help from the authorities, Lena decides to make her way there on her own to try and free Daniel.

Colonia got a lot of bad press and while it certainly won’t win any “film of the year” awards, it’s not quite as bad as that. Still, if you miss it, you won’t miss much. 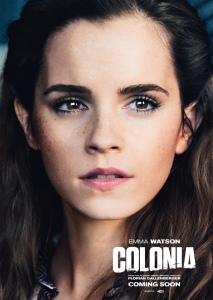 There are some problematic things about the way they decided to protray the story. It starts with the fact that they focus on a German/international couple, effectively using the political events in Chile – that affected Chileans above all – to tell the story of a white couple of outsiders. Why not focus on the Chileans who disappeared into the Colonia? Especially since Lena and Daniel are completely made up people, as far as I know. Tying into that, none of the major cast are actually latin@.

If we disregard that though, we are left with a film that isn’t exactly great, but it works for most stretches, shedding light on historical events that have mostly passed me by in my life. The way Schäfer ran the Colonia seemed rather well-researched and as gruesome as it was, it (unfortunately) didn’t feel unlikely or exaggerated. Gallenberger also portrays Schäfers pedophilia rather tastefully, if you can speak about tasteful in connection with pedophilia at all.

Lena and Daniel were a nice couple (which is a very weird thing for me to type as my name is Lena and that of my brother is Daniel), although I would have liked to get a little more background to their story – we start with Lena arriving in Santiago and obviously hoping to meet up with Daniel, but it doesn’t seem to be a fixed thing abd we don’t know how they met or how long they knew each other. Emma Watson did fine in her role, though she pales next to Daniel Brühl and Michael Nyqvist. Still it was pretty good for her.

The film does take some twists and turns that are too familiar, especially towards the showdown it felt like nothing we hadn’t seen before. But nevertheless it was interesting enough to watch. 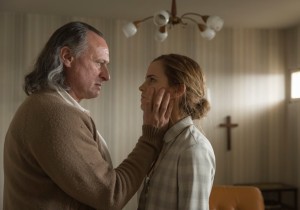 Summarizing: If you happen on it easily, it doesn’t hurt to give it a try.