Plot:
Lisa (Veerle Baetens) is a young introverted doctor who keeps everybody at arm’s length. She has no family and no friends to speak of. So she’s more than surprised when she’s informed that she has inherited the old house across her apartment building from a person she never heard of. After reassurances that there really is no mistake, she moves there. Soon she starts hearing knocking and other noises from behind the walls though. When she takes a sledgehammer to the walls, she finds a whole other world full of dangers and darkness.

Au delà des murs is a three part miniseries that completely enthralled me. The first two hours are super creepy and tense and had me at the edge of my seat, the third hour takes a turn into romance. All parts are definitely wonderful.

I admit that the show had a slight start bonus when I heard the intro music: anyone featuring an Agnes Obel song (in this case The Curse) has my attention, particularly when the show and the music fit so well together. But Obel alone wouldn’t have been enough either. Fortunately she was far from alone in creating a very particular atmosphere. [The perfect union between music and show was also achieved with Les Revenants and Mogwai, so maybe that’s a French series thing?]

Equally great as the theme song and the perfectly fitting soundtrack by Éric Demarsan was the rest of the show: Hadmar creates not only a creepy atmosphere with great sets, costumes and make-up (that wallpaper alone was brilliant), but the story itself seems completely new, although upon closer examination it isn’t – it’s a take on very old mythology indeed. But if you tell an old story in a good way, the old parts transcend familiarity. And that’s what happens here.

Above all, though, I liked the characters. I liked Lisa and I liked Julien (François Deblock) and I wanted them to succeed so very much, I barely have words. I was with them the entire way and completely caught up in their story and their fate.

I don’t want to give away too much. I knew nothing about the show going in and that is probably the best way to watch it. And I can only strongly recommend watching it. It’s magical, enchanting and truly from beyond the walls of another world. 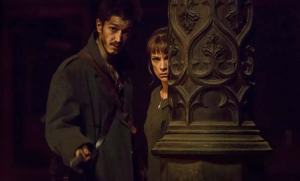 Summarizing: Probably my favorite part of the /slash spring festival.