Plot:
The orc world is being killed by evil fel magic, that slowly drains the life force of the entire planet. That’s why the warlock Gul’dan (Daniel Wu) creates a portal to the human world of Azeroth: he and his army plan to take over Azeroth for themselves. Among his generals is Durotan (Toby Kebbell) and his mate Draka (Anna Galvin) who risks the journey despite being pregnant; and as a translator they have the slave Garona (Paula Patton) who has the gift of languages. Meanwhile the humans of Azeroth are unsuspecting of the threat to their world. Only Khadgar (Ben Schnetzer) who used to study to become a mage notices the signs of fel magic use and warns King Llane Wrynn (Dominic Cooper). The King sends Khadgar and his own brother Anduin Lothar (Travis Fimmel) to find the mage and protector of the realm Medivh (Ben Foster) to ask for his help.

Warcraft really didn’t get much good buzz before its release, so I did not expect much of it, I have to admit (although I was hopeful due to Duncan Jones). But to my surprise I actually quite liked it, although it does suffer from the fact that it really is only one big piece of set-up and not a finished story. 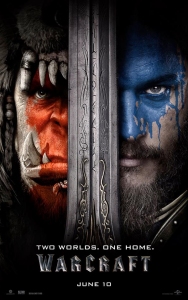 I’m not a WoW player, though I have been meaning to maybe give it a try at some point (although I suspect it’s not so much my thing). Just so you know that I can’t possibly know whether Warcraft is a good adaptation of the game at all or fits with the narratives established there. But of course I am aware that there has gone a lot of narrative work into the set-up thanks to the long experience of the computer game. That explains why Warcraft often feels like a recap chapter at the beginning of the fifth book of a series: they start pretty much at zero and until everyone is caught up and ready to go, the film is over – which is a pity because I would have liked more conclusion to the story.

The thing is, though, I was completely engrossed into the film, so that I hadn’t actually notice how much time had passed and when the open ending came, I really wasn’t ready for it, both from a narrative point of view (because it wasn’t much of an ending and more of a beginning) and simply from an enjoyment point of view – I just didn’t want it to be over yet and wouldn’t have minded to stay in this world a little longer.

Warcraft isn’t perfect. Some things were a little hamfisted or tropey and some characterizations came in very broad strokes. But the thing is – they took care to give all the major players (and there are quite a few) their characterization and understandable and clear motivations. This should be a rather basic requirement for all films, but sadly scripts often fall short there. In the worst moments, Warcraft tries really hard and more often than not, they succeed nicely, giving the very nice cast a lot of stuff to work with. As usual, I have to compliment Ben Foster in particular, whose Medivh could have easily gone all the way to ham, but somehow retains an honest emotional core.

Some things could and should be better than in this one like that they should include some people of color who aren’t painted green or CGIed into oblivion (okay, this one had Ruth Negga and that’s always a good thing) and more female characters in more central roles. But there was enough to this film that I do hope that they will make a sequel to this, actually do better and finish the story. 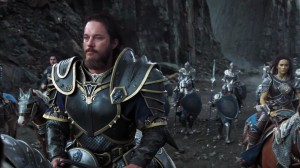 Summarizing: Not bad at all.