Plot:
Alan Bennett (Alex Jennings) moved to a new neighborhood and he quite like it. Part of the neighborhood is Mary Shepherd (Maggie Smith), a woman living in a van parked in his street. She’s weird, often rough and has issues, but Alan does take a liking to her. So when her existence is threatened because her road is being declared a no parking zone, Alan permits her to park the van in his driveway. What was supposed to be only a temporary solution, turns into a long-term fact and Alan starts to find out more about Mary’s past.

The Lady in the Van was a sweet film, told with a sly sense of humor that keeps the story from turning too dark, even when the realities it faces are harsher. It’s an enjoyable mix, although it stays a little too shallow to use the potential for social criticism it would have. 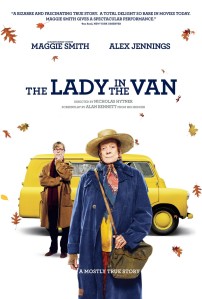 It takes a special mix of egotism and self-deprecation to write a story that is as much about the woman living in your driveway and yourself. There is definitely some narcissism there and it could have turned insufferable if Bennett didn’t make as much fun of his fictional alter ego as he makes of everybody else. Everybody, that is, but Mary. Mary is sometimes funny, but she’s never made fun of by the film – which is important as homeless people are too often the butt of jokes. But The Lady in the Van carefully avoids that fate, always leaving Mary her dignity.

In fact, it’s exactly when her dignity, her right to be who and how she is comes under threat that the film leaves all sense of humor behind for important moments so that the impact of decisions and people around Mary has time to trickle into the audience and make itself felt. Then the film quickly returns to his light-heartedness – it really doesn’t want to seem too serious – but these moments are important beats in the narrative. 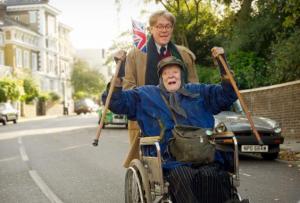 It’s also due to Maggie Smith that this works so well. She’s perfectly in command of Mary, and knows exactly when she has to grasp those moments and let Mary’s excessive vulnerability shine through her rough exterior.

Despite all those good things, The Lady in the Van is a little too preoccupied with being fun to really show that there is a bigger, wider reaching problem regarding homeless people and how they are treated. Of course, it’s perfectly okay to just make a fun film that’s entertaining and good-hearted – and Lady in the Van is just that – but I do wish, they would have dared to dig a little more deeply, past Mary’s singular fate and into the communal problem behind it. But other than that, I really don’t have any complaints. 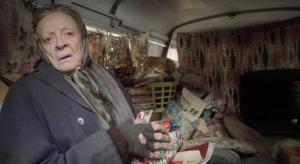