Plot:
Rose Creek is slowly being squeezed dry by Bartholomew Bogue (Peter Sarsgaard). When one of the citizens (Matt Bomer) refuses to cooperate with Bogue, he is shot. His widow Emma (Haley Bennett) decides to go and look for help, somebody to take on Bogue. By chance she finds Chisolm (Denzel Washington) and becomes a witness to his skills as a gunman. She begs for his help and Chisolm agrees reluctantly. But first he’ll have to get together a team and so he gets in touch with a few old friends.

I have neither seen Seven Samurai, nor the old Magnificent Seven, so I was fresh to the story with this film and I really wasn’t particularly taken with it. 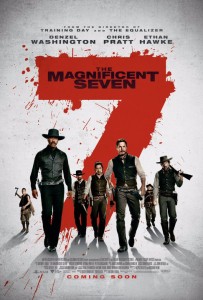 The good things about this first: it was beautifully shot and simply a feast for the eyes (and by that I don’t mean just Byung-hun Lee, even though he was particularly hot in this one). Both landscape and action were impeccably framed and simply delicious to watch.

I also very much liked the cast who played well and had good chemistry with each other. And it’s rare that we get a colorful cast like this one (of the seven, only two were white dudes, with a black man taking the lead) which is all kinds of awesome and has to be applauded.

But now we’re getting into the troublesome territory: the women. First of all, where were they, in general and in particular? There’s Emma and then there is … nobody. Okay, a couple get to walk through the background, but none of them are women of color (if I remember correctly) which is especially disappointing when you look at the racially diverse main group.

And then there was the ending which simply didn’t work for me. For one, that final showdown simply dragged from here to eternity and should probably been half as long. What remains after it is a massacre. And the venerant tone with which this massacre is proclaimed “magnificent” really, really, really gave me the creeps and made me incredibly uncomfortable. Yes, they thought against oppression and won, which is great, but to call the death of so many people magnificent? No. Necessary, maybe. Called for, maybe. But not magnificent. 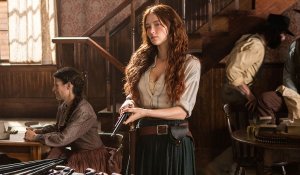 Summarizing: No, not my cup of tea.