Plot:
Stefan (Lukas Turtur) and Andreas (Philipp Hochmair) have it all: they love each other as much as on the first day, they have a beautiful home on the outskirts of Vienna, good careers with the Radio Symphony Orchestra where Stefan is musician and Andreas a scheduler, and a large circle of good friends. Completing their luck is Moses, a tomcat they adopt. But with an sudden act, their life as they used to know it is instantly over.

Kater is one hell of a film. Well-acted, nice characters, beautiful music and emotionally engrossing, it shocked me like a film rarely has. It should probably come with a warning, but to specify that warning would also give too much away. So, if you’re not particularly fragile, read nothing more about the film and watch it. 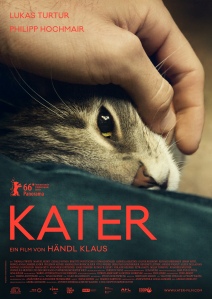 If you feel, you need more information, read on, but beware: there will be SPOILERS.

I didn’t know much about the film going in, I just knew that it was an Austrian movie with a gay couple, so of course I had to watch it. I don’t think I even knew about the official plot description that hints at something being wrong. So I was sitting in this film and enjoying Stefan and Andreas being the cutest couple ever and then getting the cutest cat (that looks like my two cats) and then BAM! Without warning, Stefan breaks the cat’s neck at the breakfast table, right in the middle of breakfast. On purpose. I struggle to think of a thing in a film that shocked me more, ever.

My first reaction was wanting to scream at Andreas to kick Stefan the fuck out of the house and fast. But it soon becomes clear that he is having a mental breakdown. And of course, you don’t kick people out for being ill, even when it cost your cat’s life. Still, in Andreas’ position, I don’t know if I would have had the strength.

But Andreas sticks around. He is obviously shaken, but he stays and tries to help. It’s at this point that the film makes two mistakes: one, it just doesn’t mention that Stefan is in continuous psychological/psychiatrical care. After the first visit, we never hear of it until the end of the film when it’s like, yeah, of course he’s still seeing somebody and working on his issues. It would have been important to hear of that sooner.

And two, Stefan later loses his eye and that felt way too much like karma dealing out disability as cosmic punishment. Which is ableist and runs counter to the normalizing and understanding approach to mental illness that the film showed until then.

But other than those two things, Kater was a movie that enthralled me, and I still think about it often.