Plot:
Florence Foster Jenkins (Meryl Streep) loves singing opera and dreams of performing for a big crowd. And since she’s rich, she has the means to make her dreams come true, despite the fact that she can’t actually sing. Her husband St Clair Bayfield (Hugh Grant) is devoted to her and wants to make sure that she’ll be able to perform without being ridiculed. He hires pianist Cosmé McMoon (Simon Helberg) to practice with her and together the two men form an alliance to get Florence on the stage.

Florence Foster Jenkins didn’t blow me away, but it was a sweet and entertaining film that I enjoyed.

It’s quite surprising that a film called Florence Foster Jenkins with Meryl Streep playing the eponymous character focuses so very little on her. Ultimately this is a film that isn’t about Florence herself but aboout the two men – her husband and her pianist – working to fulfill her dreams. Which strikes me as weird, like they were taking her story away from her. On the other hand, usually we only get films where the women work to fulfill the men’s dreams, so that’s something I guess.

That framing also paves the way for Simon Helberg to steal the film and run off with it. He was really fantastic, funny, sweet and emotional. Not that Streep or Grant were bad, but he is the real star of this movie. 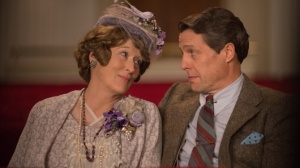 I really liked how the film portrayed the marriage between Florence and St Clair. They love each other deeply and affectionally, even though St Clair’s sexuality is lived out with another woman – in this case, it very much felt like what everybody wanted (except maybe the other woman), a mutual agreement that is just how their relationship looks like, without making it any less.

The film is entertaining and made me laugh, but it’s not necessarily a film that will stay with you for a long time or that makes you want to discover its depths. But that’s not really a prerequisite for a good film and if you just want to spend nice two hours, there are way worse things you could do.