Plot:
Louis (Gaspard Ulliel) hasn’t spoken to his family in years. But now that he is terminally ill, he wants to see them and let them know that he is dying, and soon. So he leaves his boyfriend in the big city and makes his way home to his mother Martine (Nathalie Baye), his older brother Antoine (Vincent Cassel) and his wife Catherine (Marion Cotillard) – who Louis never met before – and finally his little sister Suzanne (Léa Seydoux) who barely remembers him at all. But the reconciliation Louis is most likely hoping for is overshadowed by old resentments.

Juste la fin du monde is probably the weakest of the Dolan films I’ve seen so far (which is not all that many, unfortunately). It’s still above average, but I’ve come to expect more of Dolan than what the film gave me. 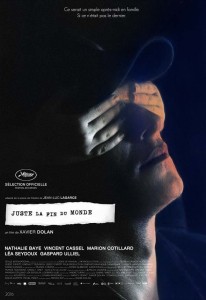 It’s really astonishing how much dysfunctional family you can pack into one film. But with well-drawn characters and a strong cast, even the shortest dinner can turn into a nightmare. And we get both here, which means that watching the film becomes almost physically uncomfortable. And the film takes care not to take any sides. At best, you’re with Catherine who is more on the outside of that family constellation, having married into it and not grown up with it.

But the dysfunctional family is only one part of the film – the other part is the dying Louis’ nostalgia for his childhood. And those two parts never really go together all that well, though I enjoyed both on their own. Louis being terminally ill itself felt a little overly dramatic – I wonder if the entire plot couldn’t have kicked off with a smaller reason for Louis to come back, giving the ending a bit more of a hopeful touch as well. 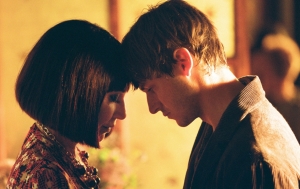 But be that as it may, the film still works for the most part. And that depite the fact that it uses so much horrible music that the soundtrack alone should have destroyed it. Instead we get the most touching, emotionally reverberating scene set to Dragostea din tei. Don’t ask me how that’s possible, but it is.

Still, something seemed missing from the film. Maybe I would have needed a little bit more likeability to really connect to the characters. Because despite the film’s strength, I remained at arm’s length from it and don’t feel that it will stay with me for very long (quite contrary to Tom à la ferme).

Summarizing: It’s good but not great.