Plot:
Tanya (Alina Khodhzevanova) realizes one day that nothing about her life really makes sense to her. Her father is an alcoholic, her boyfriend brings other women home – while she’s there -, her mother is distant. She really has no joy in her life. Her conclusion is to attempt suicide. But it doesn’t work out that way and she finds herself in a psychiatric hospital where she starts to knit – both literally and figuratively.

I Know How to Knit has a rather short runtime. Nevertheless the dreariness it exuded from me with every second was absolutely tiring and made the film feel much longer than it actually was. It also made the ending even harder to swallow – the positivity there came out of nowhere for me. And anyway, by that time I was mostly just glad that the film was over.

That’s not to say that there was nothing about the film that worked. I liked the color scheme that is almost monochrome a lot and certainly muted, which fit very well with Khodzhevanova’s kind of colorless, pale fragility. Since it’s fair to say that Tanya is a rather depressed character, those things also fit nicely together. 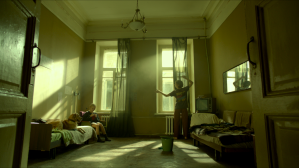 But I wish I had seen the film that the program described to me, citing Tanya as the Russian Amélie. And while there were a couple of strange, humoristic moments, it wasn’t enough to keep me interested or make it feel like the time passes. At all. 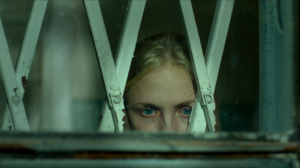 Summarizing: Didn’t work for me.