Plot:
Mathilde (Lou de Laâge) works at a doctor for the red cross just after World War 2. She finds herself dispatched to Poland to take care of the concentration camp survivors and the French soldiers stationed there. It is in the hospital there that a young nun, Maria (Agata Buzek) from a near-by convent finds Mathilde and begs her to help them at the convent as well: they were raped by Russian soldiers and many of them are pregnant as a result. And not only do these pregnancies come with the usual dangers, but should anybody find out about their state, they would risk losing the convent, their home, entirely.

Les innocentes tackels a hard topic and it does so with a lot of sensitivity, but also a couple of lenghts. But I did enjoy it and the push it makes for solidarity among women. 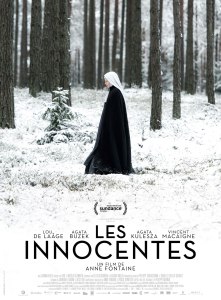 I don’t think I’ve ever seen or heard a story about what happened with nuns during World War 2 until this film. I know that in Austria, part of the resistance to the Nazis came from the church, but that’s pretty much where my knowledge ends. But of course it makes sense that a community of women who more often than not live in a remote location will be particularly vulnerable to roving soldiers. And Les innocentes pulls no punches to show just how vulnerable they were.

And it also shows that the violence didn’t end with the war, far from it. Especially not for women. Not only do the nuns still experience the long-term effects of the direct violence they experienced, effects that are exarcebated by their religious beliefs, but there is more than one moment where things get risky for Mathilde, too.

And yet, the film’s heart lies with the safety and love the women are able to find with each other, the fierce protectiveness that runs through every frame and the stubborn refusal of at least a precious few to let the violence they had to endure shape their entire lives forever. The solidarity and friendship that is found there is a rare sight in films indeed.

Under these circumstances I find it very excusable that the film does have a couple of lengths around the middle and that a later revelation was rather obvious pretty soon. I appreciated the film and its (feminist) message more than enough to not let those things bother me overly much. 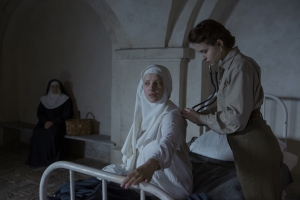 Summarizing: it’s not really a film to enjoy, but it is definitely worth seeing.