Plot:
Chiron, called Little (Alex R. Hibbert), grows up in a rather rough neighborhood in Miami. One day, as he runs from bullies, drug dealer Juan (Mahershala Ali) find him and, together with his girlfriend Teresa (Janelle Monáe), they offer Chiron a place where he can find the safety his own mother (Naomie Harris), an addict, is unable to give him. And Chiron, who struggles not only with being bullied but also with his crush on Kevin (Jaden Piner) and what that means for his life, needs sanctuary maybe more than most. But things don’t last and as Chiron grows to an adolescent (Ashton Sanders) and then a young man (Trevante Rhodes), he continues to fight and find a place in this world where he can just be.

Moonlight is a beautiful, emotional film that tells a story from an unusual and very much needed point of view. It’s a film very every frame is in the right place, the soundtrack complements the story perfectly and it hits every emotional beat for maximum effect. It’s amazing. 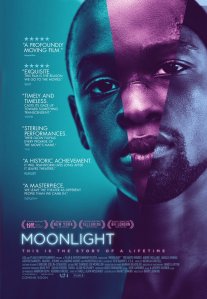 It is not news that black stories, or generally non-white stories, are underrepresented in film. And when it gets to more specific intersections – like in this case black and queer – it becomes more difficult still. So a film like Moonlight is a gift already from simply the story it tells, and by the fact that it’s being told by black filmmakers as well.

That it tells the story of a black gay man and his black bisexual crush isn’t the only mold Moonlight breaks. It’s also a film that shows us a deeply caring black father figure and absolutely soft interactions between him and the boy he basically adopts. And it gives us black men who happen to be drug dealers and not black drug dealers who are barely people.

But even if it had been the most run of the mill setting and a story that had been told a million times already, Moonlight would still be a beautiful, perfectly crafted film.

It’s a difficult life for Chiron and the film perfectly shows his pain and sadness without getting stuck there or becoming pornographic with the suffering. And while all the little ways in which Chiron is being hurt and caged by his environment hit home, the film also shows that he is a survivor. And it ends on a conciliatory note that gives hope that things can and will change.

The cast gives us great performances all around, the cinematography and lighting is stunning, the soundtrack, as I said, is perfectly chosen. If I wanted to find a flaw with the film, I’d have to go hunting for it with a microscope (I even found it more than forgivable that there are very few women in the story, given its topic) because from where I stand, it’s pretty much perfect.