“Plot”:
David Farrier is a journalist who stumbles upon competitive tickling. Intrigured by this – to him – new sport, he starts to dig into the story. But his request for an interview with the organizers gets declined – quite rudely. This makes Farrier even more curious and he starts to dig deeper, following the story along every unexpected turn it takes – and there are quite a few of those.

I don’t think I’ve ever said “holy shit what the fuck” as much during any other documentary as I did during Tickled. It really is an exceptional story. 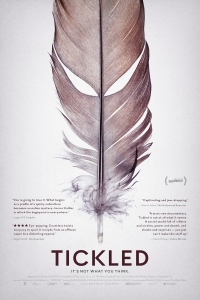 Tickled is not a subtle documentary. It’s a weird story and it’s definitely put together for maximum effect. But they know how far to push the sensationalizing, keeping it right at the edge of where the sensation would start to affect the story’s credibility.

In any case, it’s incredibly entertaining to watch – in an open-mouthed, what the hell is going on, absolutely astonishing way. The entire tickling thing is pretty weird to begin with, but the real absurdity only starts there – and it gets stranger and stranger. I actually feel like I shouldn’t say more about the story. Because it’s best discovered as you watch. 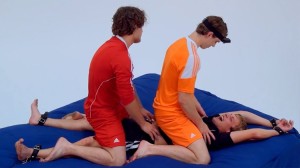 The problem is that among all the absurdity, on of the central problems with the story is lost: the systematic abuse and exploitation of young men who think they can make a quick buck by participatig in a sports event. (And I kind of hate that my review mirrors that as well.)

The thing is – if the people responsible for the entire thing had just a lick of common sense, the whole thing would have disappeared in a fluff piece. Instead they got an entire documentary about them. And not just any kind of documentary – the first documentary where I actually hope that it will get a sequel because I wanna know how things continue.